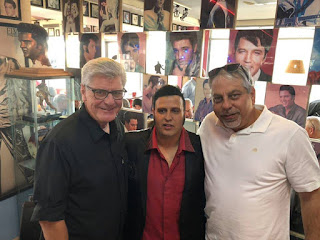 In November, Mississippi Governor Phil Bryant made his fourth trip to Israel in five years, leading a 20-member trade delegation and speaking at the third Jerusalem Leaders Summit.

Bryant was presented with the Distinguished Leadership Award for his efforts to strengthen the Israel-U.S. strategic partnership. A strong Israel advocate, Bryant’s emotions were on full display when he addressed the crowd. “We have so many friends around the world,” he said, “but none as close, and none that I love more than Israel. I am called to be here. Perhaps sometimes we cannot explain exactly why, but that call, that voice, is stronger than any other that we hear, to come to Israel, to Jerusalem, to do what I can to strengthen this relationship.”

The summit featured leading voices who articulated principled solutions in addressing the 21st-century’s economic concerns, global threats and security challenges. The parent organization — the International Leaders Summit, co-founded by Joel Anand Samy and Natasha Srdoc — brought together leaders from America, Britain, continental Europe, India and Israel to its inaugural Jerusalem Leaders Summit event in 2015, affirming the rule of law of civilization, based on shared principles and values.

This year’s summit focused on strengthening the rule of law, advancing economic freedom and free trade, and featuring contributions from the fields of innovation and technology that benefit individuals around the world.

Anand Samy told JNS “We are delighted that Governor Phil Bryant is here with a trade delegation… This is a practical approach that we are infusing into the Jerusalem Leaders summit. Bringing business leaders together who are looking into establishing economic partnerships, security partnerships through their endeavors working with government entities as well. So this is where we see the next level developing of us being involved as a team, as an organization, in facilitating these important gatherings.”

Also speaking at the Summit was Sampat Shivangi, a prominent Mississippi physician who was recently named to the ILS executive advisory board.

Also on schedule was Rev. Chris Edmonds of Tennessee, an ILS board member whose father, Master Sergeant Roddie Edmonds, was recognized as Righteous Among the Nations for saving the lives of American Jewish soldiers during the Holocaust when his unit was captured by the Nazis.

Bryant told Israeli media that his first Israel visit in 2013 came when he saw that the U.S. administration “was weakening in our support of Israel,” so he wanted to come to Israel to reiterate that the heartland of America supports Israel.

Israeli Consul General Lior Haiat from the Miami Consulate accompanied the Nov. 17 to 21 trip, which included a visit to the Elvis Inn, a restaurant and gas station near Jerusalem that is a shrine to the Mississippi-born King of Rock and Roll. “It kind of caught me by surprise,” Bryant said. “I walked in, there’s a guy singing ‘Jailhouse Rock.’ Sounded just like Elvis Presley. And I’m in Jerusalem.”

On Nov. 20, Bryant met with Prime Minister Benjamin Netanyahu, who called Bryant “a stalwart friend of Israel and a great champion of the Israeli-America alliance.”

Bryant brought greetings from President Donald Trump, “my dear friend, who called me on Sunday night at 02:00 Israeli time to make sure that I expressed our strong support of Israel, not only in Mississippi, but across the United States and his administration again for peace in our world and in our time, and you are doing so much to help us reach that and we thank you for that.”

Netanyahu responded, “We appreciate what President Trump is doing and his effort to contain Iranian aggression, which is the greatest danger to the peace of the world.”

In their meeting, they discussed cyber, fighting BDS and strengthening the alliance against “common enemies” and for “common challenges.”

“I was at a board meeting with Caterpillar, and they said they need to stop selling Caterpillars to the Jewish nation, and we said, ‘No! We’re not going to do that’,” Bryant said. “We have had success. We were able to pass a bill that said we will not invest, in the State of Mississippi, any of our dollars, whether education or retirement dollars, in any company that is helping threaten Israel, attack Israel, [or] supporting those nations and rogue organizations that are a threat to Israel.”

Bryant told JNS how he would suggest that people get to know the real Israel — not what they glean from the mainstream media.

“You have more people that come and visit. You have more governors, more senators, more congressmen or more prime ministers. People from all over the world,” he said. “One of the things that we have in common is that people misunderstand Israel as much as they misunderstand Mississippi. That’s why we’re here. I tell people, ‘Once you’ve come here, you can go back as an advocate for Israel and say you need to go’.”

“Everyone I talk to says, ‘Oh, I wish I could go to Israel.’ Well, go! They’re flying planes out of New York and Atlanta every day… The more people that come here, I think the more they understand the reality that is Israel. It is the most remarkable place in the world,” gushed Bryant.

Why does Mississippi have an emphasis on Israel, with four missions in five years? Bryant said the state has a desire “to work with one of the most successful nations in the world.”

He explained, “We in Mississippi have to learn how to do remarkable things. We have to overachieve… that is what has been taking place here in Israel since 1947.”

The most remarkable thing about Israel, Bryant said, is that everyone he sees there “just wants peace.” With the threats and attacks from Israel’s neighbors, one would think Israelis would be angry and want to strike back, “and you could. But you just want peace.”