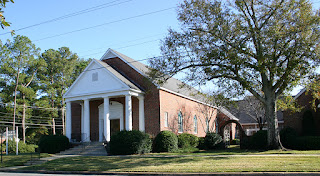 In July 2007, I accepted the position of rabbi at Temple Emanu-El in Dothan. I was a bit nervous. Here I was, a Yankee from Connecticut, moving to the Deep South, wondering if I would be accepted and what I would experience. My only knowledge of the Deep South was pictures of fields of cotton and the searing images in Life magazine of the racial tensions of the 1960s. To my surprise, Dothan was very welcoming to both my husband Rob and me, and we enjoyed our life in the community for 10 years until our retirement in June 2017.

The Dothan depicted in the article entitled “A Millionaire Paid Jews to Move to a Small Town in Alabama” that was published in the Washington Post on Dec. 27 is not the community I experienced. In fact, when I finished reading the article, I was convinced that the reporter had come with an agenda to portray the South as ignorant and insular.

I can honestly say that I never experienced anti-Semitism while living in Dothan, and most Dothan Jews share this aspect of our life here. Of course, there is an occasional anti-Semitic slur made by a hateful or ignorant person, but this is not unique to Dothan. And I never felt unsafe even while spending long hours in the synagogue alone, or wearing a kippah (yarmulke) in public. I found people to be respectful of our heritage and beliefs, and while there was much lack of knowledge about Jews and Judaism, in general people were willing to learn about us.

Every year we had a Neighbor Night at the synagogue where we invited the community to attend our Friday night Sabbath services to learn about our worship and to ask questions. Every year it was well attended, and the questions were for the most part thoughtful and displayed a healthy curiosity about our worship and beliefs. This willingness to learn about us was not reflected in the article.

One of the most satisfying aspects of my time in Dothan was the growth of the interfaith community. The synagogue has always had good relations with our across-the-street neighbor, the First United Methodist Church. We have shared each other’s parking lots, with FUMC offering their parking lot to us at the High Holy Days, and us offering ours to them at Christmas and Easter. They used our building when they experienced a fire in the 1970s. I taught classes with Christian clergy, and spoke in area churches and the mosque.

The Interfaith Thanksgiving service which highlights at least seven different faiths has become a Dothan tradition after 11 years, and was begun during my tenure in Dothan. There is an interfaith group that meets once a month to eat lunch and get to know each other better. All of us have found that learning about other faith traditions has enriched our own faith. This is not a characteristic of an insular community.

The week following the massacre of Jews in Pittsburgh in October, the larger Dothan community was invited to attend Sabbath services at Temple Emanu-El. More than 200 people attended to show solidarity and support with the Jewish community at this terrible time for us. The Rev. Lynn Nesbitt spoke that night. I understand the support offered was a great comfort to the Jews in attendance that night. This incident was relayed to the Washington Post reporter, but she chose not to include it. This is not a characteristic of an anti-Semitic community; rather, it is a characteristic of a community where Judaism is accepted and respected.

Rob and I were very happy the 10 years we lived in Dothan, and felt accepted by the community at large. Dothan has its shortcomings as does any community, but the positives of living in Dothan outweighed the negative. We retired to Colorado to be with our family and the most beautiful grandchild ever, and are enjoying our retirement here. We do not miss the heat and humidity of the Deep South, but we do miss the people in the community who were so caring, and the close-knit Jewish community. We are so sorry and sad that the article in the Washington Post was so slanted and hurt so many people who are so dear to us still.

Lynne Goldsmith served as rabbi of Temple Emanu-El in Dothan from 2007 to 2017.