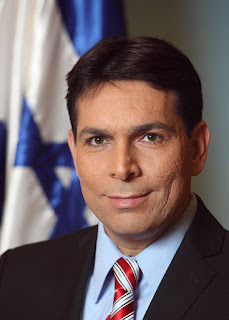 A new chapter of IfNotNow has opened in New Orleans, and is launching its public activities with a protest of a planned visit to the city by Israel’s ambassador to the United Nations, Danny Danon.

Founded in 2014, IfNotNow uses social activism and direct action to end “the American Jewish community’s support for occupation” of the Palestinians.

Danon’s visit to New Orleans for a dinner by advance reservation at Beth Israel and a private Israel Bonds event the weekend of Jan. 18 was briefly in question after Israel declared new elections last month.

There were strong rumors that Danon would resign his post and run in the election, but a few days later he stated that under Netanyahu, Israel “continues to achieve unprecedented accomplishments in the diplomatic arena. During this challenging period, I will continue advancing Israel’s position at the U.N. and will not participate in the upcoming Knesset elections.”

In anticipation of his visit, the New Orleans group started a “#DenounceDanon” petition, “to keep occupation supporters out of New Orleans synagogues.”

The petition states “Danon traffics in racist, xenophobic rhetoric to further his nationalist agenda… Our call is rooted in an unwavering commitment to freedom and dignity for all people — Israelis, Palestinians, and New Orleanians.”

Robert Ascherman, a group leader and member of Beth Israel, said “it is my deep commitment to Judaism that led me to my synagogue and to #DenounceDanon, a man whose racist incitement of violence is beneath the dignity of my beloved congregation.”

Elias Newman, spokesperson for the group, said they recently reached out to the Anti-Defamation League, Touro Synagogue, Gates of Prayer and the Jewish Federation “asking if we can present our petition at their board meetings this month, to sign on with us.”

The New Orleans group was formed in September, with Havdalah in the Sukkah as part of a Sukkot Against Demolitions campaign. The group also started an open letter to the Jewish community, asking them to “seek safety in solidarity with other marginalized groups” instead of working with Republicans, “the very people who uphold white supremacy.”

They also promoted the New Orleans Palestinian Film Festival in November, and in December held a class, “Anti-Semitism and Occupation 101” which explores how anti-Semitism is “connected to white supremacy and Israeli occupation,” and “the cycle of anti-Semitism that pits Jews against other marginalized groups.”

Shortly after the workshop, they called out graffiti found by a member in a local coffee shop, which had a Jewish star next to the comment “Intellectuals are the shoeshine boys of the ruling elites.”

On its Facebook page, the group stated “We must continue to call out anti-semitism as it grows in our country and build solidarity between all people affected by the rise of white nationalism… This is why talking about anti-Semitism and occupation together is so important in New Orleans.”

They also launched a petition drive, “New Orleans Jews Say: Safety through Solidarity, Not GOP Leaders and Sheriffs.” It states the New Orleans Jewish community “has two choices going forward: will we buddy up with American leaders who push white nationalism but promise Jews ‘security,’ or will we unite with other marginalized communities and resist together? We empathize with the desire for security, and we are here to remind our community that sustainable safety is not found in right-wing politicians and sheriffs.”

Nationally, much of IfNotNow’s activism centers on students and young adults. Their “#YouNeverToldMe” campaign accuses Jewish summer camps and day schools of ignoring or justifying the occupation, and calls on institutions “to provide Jewish education that advances freedom and dignity for all people.”

The group also targets Birthright, the free trips to Israel for Jewish college students, saying it is funded by “right-wing donors” to “obscure, rationalize and defend the Israeli Occupation.” A few activists have made very public breaks with their Birthright groups while in Israel, and have been kicked off the program.

On Jan. 1, an activist disrupted Birthright’s “mega-event” for all the groups currently visiting Israel, with the organization calling it “a nationalist rally.”

The group also made headlines during the Gaza border clashes last spring, when several chapters organized events to say Kaddish, the Jewish memorial prayer, for Palestinians who were killed in the clashes. Most of those killed were Hamas operatives, according to Hamas leadership in Gaza.

In April, nine IfNotNow members were arrested in San Francisco for blocking the office of Sen. Dianne Feinstein, demanding she condemn Israel’s actions as Gazans stormed the border fence. A similar protest resulted in arrests outside Sen. Chuck Schumer’s office.

In March, the group said Women’s March leaders “erred” in praising Louis Farrakhan, who the group acknowledged is an anti-Semite, but castigated the “outsized” reaction of the Jewish community, stating that mainline Jewish groups are ignoring “the rise of violent, anti-Semitic white nationalism” as well as “racism and Islamophobia in the American Jewish community.”

IfNotNow also states “we do not take a unified stance on BDS, Zionism or the question of statehood” but “work together to end American Jewish support for the occupation.”