In quest to find anti-Semitism in Dothan, Washington Post missed the real community 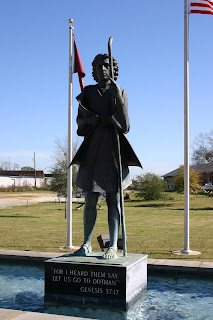 Some words are just… big. Anti-Semite, for example. That’s an awfully big word, with a lot of weight to it. It grabs the reader’s attention. So, we understand why nearly every journalist who has sought out a story about Dothan, Alabama’s Jewish community has tried to dig out that word. If a reporter asks enough people enough leading questions, maybe they can get someone to say it. And this time, it worked.

Out of hours and hours of deep conversation with rich context, someone provided the fodder. And a reporter can’t be faulted for simply quoting a source, can she? Or might context matter? Might it matter that within our community, by and large, hatred of Jews does not exist? Or that the relationships Dothanites have with our neighbors are enriched by our differences? Or that the vibrancy of the interfaith community in Dothan rivals that of any other community?

Might it matter that, more or less, Dothan is just like every other place in America? I suppose it perhaps would surprise you to know that the Anti-Defamation League’s H.E.A.T. (Hate, Extremism, Anti-Semitism, Terrorism) Map for our corner of Alabama is all but blank.

Dothan is certainly not a perfect place, but do not try to paint us over with the brush of ignorance and hatred. Among my diverse local tribe of people, we have difficult and important conversations about how we can grow the cross-cultural, racial and religious relationships here – just like all good people in all places have those conversations about their own towns.

Here’s the thing about big words — how we choose to define them really matters. If an anti-Semite is my good neighbor, friend or co-worker who is giving thanks to G-d in the only language they know how, what word should we use for people like the man who spewed a hateful diatribe at a deli in Boca Raton, as reported in Hadassah Magazine last month? What word for those who painted swastikas on campus at Kent State also last month? What word for the man who murdered eleven Jews in Pittsburgh in October?

A prayer spoken by a friend in Dothan and said in Jesus’s name doesn’t quite seem to measure up to the definition of anti-Semitism.

One last thing about big words — they can really hurt. Within hours of the publication of the story about our community, all of Dothan was searching their memories and souls. “Was it me?” they asked themselves. “Was I the one to offend?” They picked up their phones to call their Jewish friends, starting the conversation with, “Mea culpa! I did not mean to hurt you. Please forgive me.”

They did this having no earthly idea what it was they were apologizing for. They had simply read that their neighbor may be hurting and they felt terribly about it. And most of them did it because they are good Christian people — a quality that was framed in this story as an accusation instead of an asset.

So, what was missed in the author’s mission to find anti-Semitism in Dothan, Alabama? Missed was the opportunity to celebrate Temple Emanu-El’s shared interfaith mission with our Methodist neighbors across the street, which brought Lisa Priddle to teach about Chanukah at the church. Missed was Lisa speaking to one of our Rotary clubs the following week alongside two dear friends of the Jewish community, the Rev. Joe Johnson and Imam Raymond Rasheed.

Missed was the context to a quote from Mr. Blumberg showing that he believes Dothan, in fact, to be less fraught with cultural tension than other places, and he wants others to be able to enjoy what we have here. Missed was our friend and hospital chaplain, a Quaker, who we turned to for pastoral support for our friend who was in the hospital. Missed were the over two hundred Dothan community members of all faiths who joined us in mourning and Shabbat worship immediately following the tragedy in Pittsburgh. So very much was missing from this story.

Yes, Dothan is a small city in the South and that comes with a certain amount of historical baggage, but in 2019 we are not who you want to believe we are.

Stephanie Butler is executive director of Blumberg Family Jewish Community Services of Dothan “The Family Relocation Project” and Temple Emanu-El board member, written in response to the Washington Post article “A millionaire paid Jews to move to a small town in Alabama. Now, a couple struggle with their choice.”