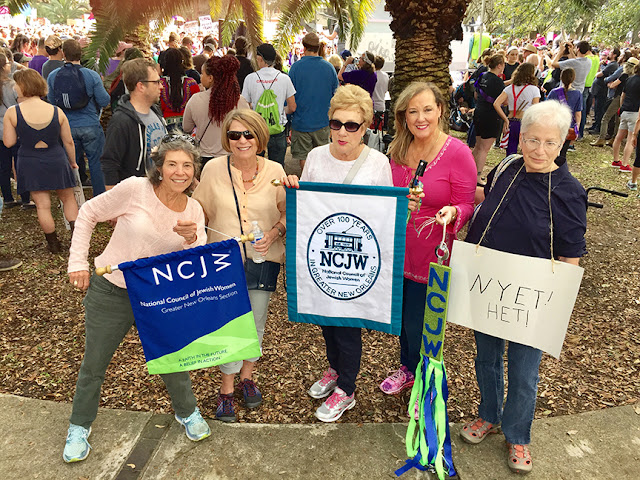 As controversy continues to swirl around the national leadership of the Women’s March, organizers of the New Orleans march have called off their Jan. 19 event.

In a Dec. 29 announcement, organizers said there were “several issues” that led to the cancellation, including the national controversy over Women’s March leadership and their condoning of anti-Semitism.

“The controversy is dampening efforts of sister marches to fundraise, enlist involvement, find sponsors; and attendee numbers have drastically declined this year. New Orleans is no exception,” the statement said.

National Women’s March co-chairs Bob Bland, Tamika Mallory, Carmen Perez and Linda Sarsour have been under scrutiny for months over allegations that the leadership engages in or condones anti-Semitism, but a recent lengthy expose in Tablet Magazine pushed that issue into the mainstream.

“Many of the sister marches have asked the leaders of Women’s March, Inc. to resign but as of today, they have yet to do so,” the New Orleans statement read.

Angela Adkins, New Orleans March chair and president of the National Organization for Women’s Baton Rouge chapter, said “a lot of people reached out to us privately about their concerns with national leadership.”

“Being linked to all the controversy was hindering our efforts in getting and keeping people involved and with fundraising efforts,” Adkins said.

To do the New Orleans march, they needed to raise at least $8,000. After a month, they were able to raise just a little over $600, she said.

The expected march attendance was also down significantly on their event page, with many people saying they would not attend. For example, Temple Sinai in New Orleans had been organizing a group to participate in the New Orleans march, then the board decided to withdraw.

Instead of the march, there will be “a listening tour” in as many Louisiana communities as possible. “We will listen to the concerns of all Louisiana women by holding roundtable discussions around the state in March, Women’s History Month. Information gathered will guide us moving forward with marches and other actions. It can also take us past the marching and towards a new stage of the movement.”

The New Orleans march wants “to be sure we are being inclusive of everyone, and reflective of New Orleans and the state.”

In its piece, Tablet reported on one of the initial meetings for national organizers, in November 2016, where Perez and Mallory allegedly spoke of “a special collective responsibility” Jews had as “exploiters of black and brown people.”

In a January 2017 meeting after the initial rallies, which drew around 4 million participants nationwide, Evvie Harmon reported that Mallory and Perez “were facing Vanessa (Wruble), who was sitting on a couch, and berating her — but it wasn’t about her being white. It was about her being Jewish. ‘Your people this, your people that.’ I was raised in the South and the language that was used is language that I’m very used to hearing in rural South Carolina. Just instead of against black people, against Jewish people. They even said to her ‘your people hold all the wealth.’ You could hear a pin drop. It was awful.”

March organizers have also been linked to Louis Farrakhan, leader of the Nation of Islam, who has made numerous anti-Jewish statements over the years. The Nation of Islam asserts that Jews controlled the slave trade and exploit blacks. The organization is also stridently anti-LGBTQ.

Recently, it was revealed that members of the Fruit of Islam, the NOI security force, protects the Women’s March organizers.

Perez, Sarsour and Mallory were at an October 2015 Farrakhan rally marking the 20th anniversary of the Million Man March.

Sarsour has been involved in several controversies over her anti-Israel statements, including that a Zionist can not be a feminist.

On Nov. 19, Teresa Shook, who is credited with sparking what became the Women’s March movement, called on the current leaders to step down, citing the anti-Semitism controversies and fiscal questions within the organization.

On Dec. 21, the National Organization for Women issued a statement that while the group supports the principles of the Women’s March, “clarification on leadership is essential” and NOW will be withholding direct financial support “until the current questions regarding leadership are resolved.”

The National Council of Jewish Women was one of the groups helping draft the original Women’s March statements of principle in 2017, and with the anti-Semitism controversy, has been working with the Women’s March leaders to help resolve issues.

In a statement, NCJW CEO Nancy Kaufman said the principles are being updated, and “every change we have recommended has been adopted, including adding the names of Jewish women to the list of feminist leaders (Bella Abzug and Hannah G. Solomon), adding ‘Jewish women’ as a vulnerable population in 2019, and very significantly, adding anti-Semitism into the preamble which outlines the agenda for the March.” She added that these changes could come about only by staying engaged with the March.

NCJW is not “officially co-sponsoring the national Women’s March but will not give up trying to educate and influence its leadership to do more to fight anti-Semitism,” she said. “It is our belief that we can, on the one hand denounce Farrakhan, the BDS movement, and anti-Israel comments, and on the other hand not contribute to destroying a movement committed to achieving NCJW’s mission.”

It was partly because of NCJW’s involvement that on Nov. 20, Sarsour issued a statement saying “the Women’s March exists to fight bigotry and discrimination in all their forms — including homophobia and anti-semitism,” and that “amidst this media storm, that our values and our message have ​—​ too often —​ been lost.”

She noted that “We should have been faster and clearer in helping people understand our values and our commitment to fighting anti-semitism. We regret that.

“Every member of our movement matters to us — including our incredible Jewish and LGBTQ members,” she continued. “We are deeply sorry for the harm we have caused, but we see you, we love you, and we are fighting with you.”

The Chicago Women’s March had already announced that it was cancelling their march, and a march in Humbolt County, Calif., was cancelled over concerns that the participants would be “overwhelmingly white” and not reflective of the community as a whole.