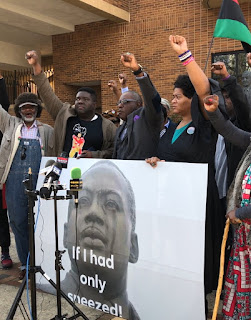 A press conference on Jan. 7 was held outside the Birmingham Civil Rights Institute, in front of the Rev. Fred Shuttlesworth statue

The decision by the Birmingham Civil Rights Institute to rescind the Fred Shuttlesworth Award to Angela Davis and cancel the Feb. 16 awards dinner has reverberated around the world.

The surprise announcement came on Jan. 4 after the Institute’s board held a meeting by phone to discuss the controversy over Davis.

In a statement, the Institute said the decision was made in September to honor Davis at the 2019 gala. In late December, “supporters and other concerned individuals and organizations, both inside and outside of our local community, began to make requests that we reconsider our decision.”

On Jan. 4, the Institute board voted to rescind the award after a “closer examination” of her “statements and public record” showed “she unfortunately does not meet all of the criteria on which the award is based.”

The statement continued, “While we recognize Ms. Davis’ stature as a scholar and prominent figure in civil rights history, we believe this decision is consistent with the ideals of the award’s namesake, Rev. Shuttlesworth.”

A Dec. 23 article by this publication detailed Davis’ well-known past as a Black Panther activist, Communist Party member and her time on the FBI Ten Most Wanted Fugitives list. It also noted her hostility toward Israel and her praise of a Palestinian woman, Rasmea Odeh, who was convicted of a supermarket bombing in Jerusalem that killed two college students.

Davis also calls for the release of “political prisoner” Marwan Barghouti, who was found responsible for three terror attacks that killed five Israelis and directing other terror attacks. Barghouti advocates for a “third Intifada” of violence against Israel.

Davis advocates for academic and cultural boycotts of Israel, which she labels an apartheid state, and is also listed by Jewish Voice for Peace as a supporter of “Deadly Exchange,” a campaign that claims U.S. police departments going to Israel to learn “best practices” against terrorism are instead coming back to the U.S. with tactics on oppressing people of color, including increased police shootings.

In its statement, the Institute apologized to its supporters, the community and Davis. “We will move forward with a keen focus on our mission: to enlighten each generation about civil and human rights by exploring our common past and working together in the present to build a better future.”

While the Institute did not comment on the specifics behind the cancellation, community leaders and Institute board members had been meeting to discuss the situation before the Jan. 4 announcement.

The Institute’s guidelines state recipients “must embody the principles that guided the American Civil Rights Movement and have characterized the life of Fred L. Shuttlesworth,” including a philosophy of non-violence and reconciliation; courage “both moral and physical, in the face of great odds;” humility, leadership by example and “an established commitment to human-rights activities.”

Some past recipients of the award have also been highly critical of Israel, including Harry Belafonte and Danny Glover.

When the honor was announced in October, Institute CEO Andrea Taylor called Davis “one of the most globally recognized champions of human rights, giving voice to those who are powerless to speak.”

Among those critical of the decision to honor Davis was Pastor John Killian Sr., past president of the Alabama Baptist State Convention, who said “Dr. Shuttlesworth’s Gospel preaching and non-violent leadership is mocked by using Brother Shuttlesworth’s name to honor Angela Davis who has supported violent actions, promoted atheistic Communism, and helped foment continued antagonism and anti-Semitism toward the nation of Israel, the one Jewish state in the world and one of America’s strongest allies.”

General Charles Krulak, former Commandant of the U.S. Marine Corps and member of the Joint Chiefs of Staff, expressed “sadness” at Davis’ selection, and urged people to research her background in supporting Soviet Bloc countries and why she was a fugitive in the early 1970s. “I can’t help but think of all the ‘foot soldiers’ who gave so much throughout their lifetimes… selflessly and without any blot on their actions,” he said. “Is there not someone more deserving of this award?”

He quoted a 2017 USA Today column by Cathy Young, who said Davis’ “long record of support for political violence in the United States and the worst of human rights and abusers abroad” undermined her role as an honorary co-chair of the Women’s March. “Those words might well be used at this particular time and about this particular honor,” he said.

The Birmingham Holocaust Education Center, which has worked extensively with the Institute on a wide range of collaborative projects, sent a letter “in good conscience and the spirit of friendship” asking the Institute to “reconsider” the honor, as Davis “does not embody the principles advanced by the Rev. Dr. Shuttlesworth” through her support of groups that single out Israel and ignore “gross human rights transgressions by other countries around the world.”

Deborah Layman, president of BHEC, told al.com that sending the private letter to the Institute board was their only involvement. “We had no further part in the decision made by BCRI to cancel the event, and we were surprised at their decision.”

Supporters of Davis were outraged at the cancellation, saying “outsiders” were trying to select who a black institution can and can not honor.

Women’s March leader Linda Sarsour, who has been in the middle of controversies over anti-Semitism in the march’s national leadership, said the decision was “absolutely outrageous. When you allow people to tell you who of your leaders is worthy and not — you lost your dignity and integrity. When will we say enough is enough?”

Birmingham Mayor Randall Woodfin said he was “dismayed” at the decision, which he said came “after protests from our local Jewish community and some of its allies.” The Institute’s “reactive” decision “did not create an opportunity for necessary consensus dialogue,” he said.

Institute Vice-Chair Walter Body told al.com that the Institute “received questions from the African-American community, the Jewish community and the white community. It was not one just community.”

Woodfin said the controversy “might have been avoided entirely, had it been handled differently,” and that the controversy “portrays us as the same Birmingham we always have been, rather than the one we want to be.”

“This is as an opportunity to engage in conversation about how we work together to resolve our differences constructively and continue to move our community forward,” Woodfin concluded. “I would be pleased to facilitate and participate in any such conversation, now and in the future.”

Davis said she was “stunned” by the news, and “although the BCRI refused my requests to reveal the substantive reasons for this action, I later learned that my long-term support of justice for Palestine was at issue.”

Because her activism focuses on international solidarity, “linking struggles in other parts of the world to U.S. grassroots campaigns against police violence, the prison industrial complex and racism more broadly,” the rescinding “was thus not primarily an attack against me but rather against the spirit of the indivisibility of justice.”

A group of local activists blasted the decision in a news conference held outside the Institute on Jan. 7. They called for a number of changes, including the resignation of the entire Institute board of directors, a “reshuffling of the deck.”

In the wake of the controversy, the board president, Mike Oatridge, vice chair Walter Body and secretary Janice Kelsey resigned on Jan. 9.

Frank Matthews said Davis is to Shuttlesworth as Rosa Parks was to Martin Luther King, Jr., and that denying the honor was “the ultimate insult” and “recognition assassination.”

Many past honorees received the award, Matthews said, but Davis “breathed the air of Shuttlesworth” and for her, the award is a “heritage… she is not a recipient, she is a daughter.”

Davis knew Shuttlesworth and went to school with his daughter, Patricia.

Carlos Chaverst said the groups will “step into protest mode.”

He said, “Our communities are being overtaken by outside groups… there has not been one person from the black community to step up and say that Angela Davis did not need to be honored.”

Matthews said the groups protesting used to give a Fred Shuttlesworth Flame Award, and will reconstitute it and present it to Davis on March 22, Shuttlesworth’s birthday.

There were divergent opinions on city support for the Institute, which is $1 million annually. Some called for the city to revoke funding, while Chaverst called on the city to raise it to $2 million, to make the Institute more resistant to outside pressures. With that, Chaverst said the Institute “will be in a good place to operate and not have to worry and rely on communities like the Jewish community or any other community to fund them.”

Chaverst said they were asking Woodfin to declare Jan. 26 as Angela Davis Day in Birmingham, in honor of her birthday. He also said they would protest and shut down events at the Institute. “We will be here until they get it right, the board members resign and justice is served.”

In calling for the board members to resign, Matthews said the current board president, Mike Oatridge, runs the Honda plant in Alabama. Citing Pearl Harbor, he asked how the head of a Japanese company is fit to be president of the Institute while the Institute says Davis is not worthy of honor.

Matthews said if they don’t get what they want, they are prepared to protest at the Honda and Mercedes plants, along with Coca-Cola and the Bayer Brothers. Jeffrey Bayer serves on the Institute board.

He criticized the developer, saying they build over the mountain but “they ain’t building a damn thing in Birmingham… If you can’t invest in us, why are you sitting on a black board.”

Bob “Bobby D” Friedman said he was amazed at the “politics” around giving the award to Davis, and said more questions need to be answered. “What was the pressure? Was it philosophical and ideological… which should play no role.”

He said the controversy is putting “good people who supported the Civil Rights Institute, worked there, did research” into this mix.

He said he is also “still looking to find out why my religion got brought into this, because someone of the same religion as me has an opinion, an economic opinion about this.

“How many Christians have opinions that other Christians disagree with? How does it become the Christian opinion? It isn’t, it’s an individual, politics and money.”

Davis said despite the Institute’s decision, she will be in Birmingham in February “for an alternative event organized by those who believe that the movement for civil rights in this moment must include a robust discussion of all of the injustices that surround us.”

At its Jan. 8 meeting, the Birmingham City Council passed a resolution “recognizing the life work of Angela Davis” by voice vote.

(Updated Jan. 9 to include BHEC content, Institute resignations and the City Council resolution.)