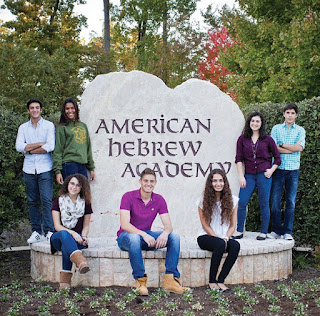 Eighteen years ago, the American Hebrew Academy opened in Greensboro, N.C., as the realization of one man’s dream for a high-caliber Jewish boarding high school.

Glenn Drew, the academy’s chief executive officer, said his uncle, Chico Sabbah, “would be ecstatic at what his vision has become.”

He would also be “perhaps a little bit surprised, as how the vision has been expanded beyond his imagination.”

One major unanticipated development was how the school has become a magnet for international Jewish students, “unlike any other school in the world,” Drew said. Over the years, the student body has represented 38 countries and 31 states.

“That has created a Jewish learning environment that is unique,” he said.

Sabbah was born and raised in New York, with a Sephardic father and Eastern European mother. He was an irrigation specialist in the early days of Israel and served in the Israeli army, then served in the U.S. military in Korea.

He worked in the reinsurance industry, and in the early 1970s he moved to Greensboro and his business “grew beyond his wildest expectations.” He started a legacy of quiet, behind-the-scenes philanthropy.

When his parents died in 1995, he said kaddish each day, with students from the local Jewish Day School leading weekday services. He realized the local school went only through eighth grade, and he set out to establish a quality Jewish high school. But with just a few dozen Jewish high school students in the area, it had to scale larger and attract students from elsewhere, as he wanted the school to rival the famed New England prep schools.

Drew explained that Jewish high schools around the world are generally Day Schools. They depend on the enrollment of students from the immediate area. For a lot of places, “that means the options for Day School either don’t exist or are limited.”

He purchased 100 acres and started developing the concept in 1996. Ground was broken in 1999, and the first students were welcomed in 2001.

The lakefront campus includes state of the art facilities, with the world’s largest closed loop geothermal heating and cooling system.

While students come from around the world, North Carolina still has the highest number of students, and the greatest proportion overall come from East Coast states.

For those families committed to long-term Jewish education, the academy provides an opportunity for students in communities where there is no Jewish high school. Almost 90 percent of the students board.

Because Jewish boarding schools at the high school level are almost all Orthodox, Sabbah wanted to establish a school for all segments of the Jewish community, and when it opened, it called itself “pluralistic.”

That term was retired several years ago, as it was “misunderstood or misinterpreted” from both ends of the spectrum. Instead, Drew said, “American Hebrew Academy is a school that welcomes all Jews. Period. Without the need for any descriptive definitions.”

The school “continues to be diverse” in religious observance and perspectives among the students, beyond what Sabbah would have envisioned.

Drew said the religious diversity goes across the Jewish spectrum of denominational practices, including those who choose to identify beyond the traditional denominations. There are even a few traditional Orthodox students who have found the academy is able to fully serve their needs and make accommodations for them.

Drew said the goal is to demonstrate “that there is more we can do together as one people than by separating ourselves by denominational lines.”

Sabbah wanted to build an institution not only devoted to academic excellence, but “to fulfill a generational need to mentor young Jewish leaders, to aspire not only to academic success but also positions of leadership, either as communal professionals or lay leaders, who would serve Jewish communities around the world,” Drew said.

The school recently hosted the Jewish International Summit for Teens, and in April will host an international Moot Beit Din competition.

That is especially important for families of international students, who send their children to the academy with the idea that they will pursue higher education in the U.S.

Sabbah is remembered each year, as students plant trees for Sabbah’s birthday, which is around Tu B’Shevat, and hold an Erev Chico celebration on Shabbat.

“We’re elated to have reached the Chai anniversary,” Drew said.

The academy continues to work toward financial sustainability, making Jewish education “more readily available to a growing number of families.”
Drew noted that the quality of Jewish education is “exceptional,” but schools worldwide struggle with making ends meet and need funding to succeed, and scholarship funds to help make Jewish education more attainable for families that want it.

For those who are interested in the American Hebrew Academy, there are two Open House weekends per year, one in the fall and one in the spring. The next Open House will be from March 22 to 24.