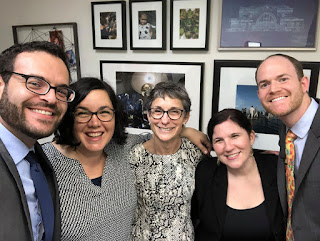 When Rabbi Katie Bauman takes over as rabbi of Touro Synagogue, nobody will need to show her around New Orleans.

The congregation announced on Feb. 25 that Bauman, who was born nearby at Touro Infirmary, was “joyfully, enthusiastically, and unanimously elected” to be the next senior rabbi.

While her family moved to Little Rock when she was four years old and she grew up there, she routinely visited relatives in “my home away from home,” New Orleans, and always wanted to have the opportunity to live in New Orleans.

Her grandparents were Morris and Ruth Berenson Forsyth. Her uncle, David, is an attorney in New Orleans, and she is also related to the Berenson and Stone families.

“It’s incredible to have such an amazing professional opportunity in a city I love so much,” she said. Having been at Temple Israel in Memphis since 2009, she was not looking for a new position, but when she saw this was a possibility, it became “the one place I looked.”

That echoes the sentiment of Rabbi Alexis Berk, who Bauman will be succeeding. After 11 years at Touro, Berk is heading to Temple Solel in Cardiff by the Sea. Berk said her family has always had “an extreme love” for San Diego, and this was the only place that could attract her away from New Orleans.

At age 10, Bauman started attending the Henry S. Jacobs Camp in Utica, until going on the National Federation of Temple Youth trip to Israel. That trip was led by Ari Goldstein, son of Touro Rabbi Emeritus David Goldstein.

She then returned to Jacobs as a counselor, educator and song leader. She said Macy Hart, the camp’s longtime director, pushed her to become a song leader, and that was “very important for me.”

She had many Jewish leadership opportunities in Little Rock, camp and in college, “all of which excited me about working in the Jewish community.” She earned a degree in Jewish, Islamic and Near Eastern Studies at Washington University.

After college, she had an internship at Temple Israel in Memphis as an education and music specialist. Growing up in Little Rock, Memphis had been the “big Jewish community” in the area.

By the end of her internship, she knew she wanted to pursue either the rabbinate or become a cantor, and decided that the rabbinate gave her a better opportunity to serve a region of the country that she is passionate about. “I want to live where my roots are, and being a rabbi gave me the best way to do that.”

After taking a year to work in a non-congregational setting in Washington to confirm that working in congregations was where she belonged, she enrolled at Hebrew Union College-Jewish Institute of Religion, and one of her student pulpits was B’nai Israel in Natchez, just down the road from Jacobs Camp. She served there monthly in 2005-06, and said “it was a wonderful year.”

At HUC, she earned the Nathan Stern Prize in 2008 and Simon Lazarus Prize in 2009 for highest academic achievement. She also received a Master of Education Administration from Xavier University.

After ordination in 2009, she returned to Temple Israel, first as assistant rabbi, then as associate rabbi.

In Memphis, she is also chair of MICAH: Memphis Interfaith Coalition for Action and Hope, and a board member of the Metropolitan Inter-Faith Association. She also prompted Temple Israel’s involvement in the HIAS Welcome Campaign, Keshet Equality Guide and OUTMemphis’ welcoming congregations.

Though she chose being a rabbi instead of being a cantor, she “cherishes” Jewish music and incorporates that into her rabbinate.

She, her husband and three children will move to New Orleans this summer. She said that she is “so lucky to have been in Memphis, and now in New Orleans. These are the congregations that are extremely formative for me.”

She used to visit Touro through the National Federation of Temple Youth, which would have regional conclaves at Touro. She also got to know Touro clergy through their visits to Jacobs Camp. More recently, she had been getting to know the congregation on an adult level, and will start off by focusing on “taking a lot of time to get to know the congregation, the people and their hopes for the community.”

With her Jacobs Camp experience, she is also thrilled that the Museum of the Southern Jewish Experience will be reopening in New Orleans next year. The museum had been housed at the camp until 2012.

Another angle of Jewish Geography is that her childhood rabbi in Little Rock, Eugene Levy, is currently serving Northshore Jewish Congregation in Mandeville monthly. Levy, who officiated Bauman’s Bat Mitzvah and Confirmation, and co-officiated her wedding, said “She’s a gem… The Temple is lucky to have her.”

Bauman said Touro “is the only congregational opportunity I have ever explored.” Memphis “is an incredible place,” but “this was the one for me.”