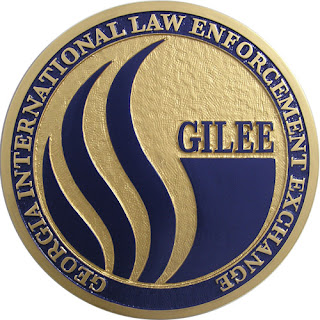 While anti-Israel groups condemn police best practices training and exchanges with Israel, many law enforcement groups have stepped forward to rebuke such attacks.

A major group organizing such trips is the Georgia International Law Enforcement Exchange, which is based at Georgia State University. The Anti-Defamation League also organizes such exchanges, the ADL Leadership Seminar in Israel, which “provides a select number of American law enforcement officials with advanced education to prevent, prepare for and respond to terrorist threats and violence.”

The programs “are designed to provide law enforcement with information and resources to protect all people and communities from extremist threats and violence, and to strengthen understanding of their role as guardians of the people they serve,” and do not involve military training or the Israel Defense Forces.

To counter those programs, Jewish Voice for Peace, a fringe anti-Israel organization, launched “Deadly Exchange,” with support of anti-Israel activists such as Angela Davis.

A JVP promotional video says participants in the exchange programs are “officers who lead police departments that brutalize black and brown communities” and the groups making “this deadly exchange” possible “are actually U.S.-based Jewish organizations,” leading even some on the left to say the campaign engages in the anti-Semitism of conspiracy and places the blame on Israel for American police violence against people of color.

When pressed about that, JVP leader Rebecca Vilkommerson said the group’s goal “is certainly not to say that Jews are to blame for violence of People of Color,” though activists routinely charge that police officers go to Israel to learn repressive tactics, ostensibly by modeling practices Israel uses against Palestinians.

In recent years, “Ferguson to Palestine” has been a popular rallying cry, with Israel considered to be part of a white supremacist power structure, and the Black Lives Matter movement includes Palestinian liberation in its organizational platform.

In a Birmingham talk on Feb. 16, Davis claimed that the Israeli military trained the police in Ferguson, where the shooting of black teen Michael Brown in 2014 sparked unrest and the Black Lives Matter movement.

GILEE was founded in 1992 to boost public safety in Atlanta before the 1996 Olympics. Activists have tried for years to shut down GILEE, because of its Israel ties. In 2010, the Movement to End Israeli Apartheid-Georgia and the Progressive Student Alliance at Georgia State organized a public day of action, claiming Israeli training includes “extrajudicial killings, racial profiling of Arabs, torture and other cruel, inhuman or degrading treatment of detainees.”

The Georgia Association of Chiefs of Police “emphatically” rejected that GILEE programs “train law enforcement in tactical or military operational techniques designed to oppress minorities or other members of their communities,” calling such claims “slanderous.”

“In fact, participants receive a better understanding of how to network with their citizenry and enhance the service delivery to these underserved communities,” the statement continued.

The Georgia Sheriffs Association also rejected the characterization. “The initiative is meaningful to the safety of Georgians and it is our hope to continue our participation for many years to come.”

On Feb. 9, the National Organization of Black Law Enforcement Executives endorsed GILEE, saying its purpose is “to enhance law enforcement leadership development and homeland security,” and “NOBLE members throughout the country have benefited from programs developed and sponsored by GILEE since its founding.”

The week before, Georgia’s Forsyth County Commission also spoke against critics, saying “Deadly Exchange” “falsely accuses American officers of learning ‘to kill and to oppress minorities’ in Israel. Not only do such claims lack any foundation in the facts or histories of such exchanges, but the inflammatory causal attribution that such training leads to deadly encounters in the U.S. is utterly fallacious and slanderous.”

The Council also “completely rejects anti-police and anti-Israel false claims that programs like GILEE amount to a “deadly exchange.”

The campaign to end such exchanges continues, and has claimed a couple of significant victories in recent months.

Durham, N.C., voted last spring to bar participation in the program, then last fall, the Vermont State Police and Northampton, Mass., police department pulled out of the program. They had been scheduled to participate in the “New England Leadership Seminar in Israel,” a 10-day police training seminar, coordinated by the ADL.

JVP activists coordinated pressure campaigns to get those departments to withdraw, claiming it was “the first time in the program’s two decades that political pressure has led to police departments cancelling their participation.” They brought in other local activists from groups like Migrant Justice and Black Lives Matter.

The group also attempted the same campaign in Boston and Rhode Island, where they were unsuccessful.

In Rhode Island, the Rhode Island Coalition for Israel found out about the JVP push and immediately went into action, sending a mass email to inform their members, who contacted the governor and Col. Ann Assumpico, thanking them for resisting “the devious, politically-motivated pressure campaign… by the malevolent radical leftist group” JVP.

Other police departments, such as Washington and Pittsburgh, are also being targeted by anti-Israel activists. In Pittsburgh, JVP cited the Tree of Life shooting, saying the right wing in the U.S. and Israel was trying “to distort and use this tragedy,” and the goal should be to protect communities “without investing in police militarization.”

In Pittsburgh, IfNotNow charged that “under the banner of ‘counter-terrorism’ training, Israel is presenting lessons learned from 50 years of illegal military occupation over a Palestinian population deprived of human and civil rights. The tools of occupation — racial profiling, violent suppression of protest, massive surveillance, a divisive ‘us vs. them’ ideology — are the last thing law enforcement should be studying.”

Robbie Friedmann, founder of GILEE and professor emeritus of criminal justice at Georgia State, examined a report by “Researching the American-Israeli Alliance” supporting the “Deadly Exchange” campaign, and found it “methodologically deficient and logically indefensible… a malicious concocted hoax that marshals propaganda disguised as research data and findings.”