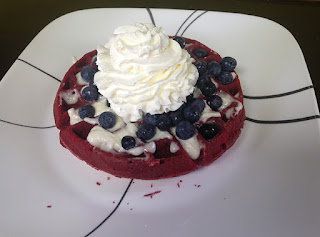 Confusion apparently arose because the original Uptown location of Waffles on Maple has changed certification, from the Louisiana Kashrut Commission to oversight by Rabbi Gabe Greenberg of the Orthodox congregation Beth Israel in Metairie.

Since last August, the newer location of Waffles on Maple in Metairie has been under Greenberg’s supervision. Rotem Dahan said the change puts both locations under the same supervision and the same guidelines.

Greenberg said the only change is that the Uptown location is now Cholov Stam instead of Cholov Yisrael.

When it first opened five years ago, the Uptown location used exclusively Cholov Yisrael products, which are derived from milk that was milked under religiously-observant supervision. Since opening two years ago, the Metairie location has been Cholov Stam, using milk products from regular dairies.

Many rabbinic authorities state that Cholov Stam is sufficient as governmental oversight means there is no danger of milk from other, non-kosher species being mixed in, but some prefer to remain exclusively with Cholov Yisrael products.

As Cholov Yisrael milk is often difficult to purchase outside large Orthodox communities, Dahan said such products are much more expensive for him compared to regular kosher products.

Rabbi Yossie Nemes of the Louisiana Kashrut Commission said there was a procedural disagreement over whether packaged items prepared at the Metairie location, a Cholov Stam location under Greenberg’s supervision, could be ordered for pickup at the Cholov Yisrael Uptown location under LKC supervision.

Dahan said they decided it would not be in their best interest to continue with LKC, and on Feb. 25, a “consumer Kashrut alert” on kashrut.com stated that Waffles on Maple “has discontinued its LKC certification and is no longer under our Hasgacha.”

Though Waffles on Maple had not changed its procedures after Feb. 25, it wasn’t until March 7 that it was announced that the Uptown location was under Greenberg’s supervision.

Nemes said the parting between Waffles on Maple and LKC was amicable, and when he heard Greenberg would be doing the certification, he wished him and the owners of Waffles on Maple “Hatzlacha and all the best.”

Their kashrut procedures include having appliances turned on by an observant Jew each day, along with doing vegetable checks when needed, and a kosher supervisor is present most of the time Uptown, though dairy restaurants generally are not required to do so. They also do hafrashat challah for pizza dough, the tradition of separating a portion of the dough to be set aside and burned. Pas Yisrael products are available upon request.

In addition to Waffles on Maple, kosher establishments in New Orleans include Rimon at Tulane Hillel, under the supervision of Rabbi Yonah Schiller; and Casablanca, and Kosher Cajun, under LKC supervision, along with Dvash Catering from the Metairie Jewish Community Campus kitchen, also under LKC supervision.