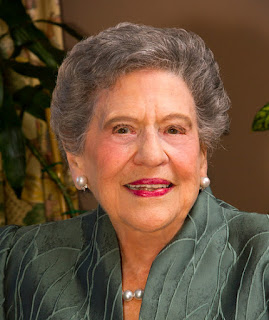 If you have fashion, you have to have stores to sell it. This year’s honoree at the Jewish Children’s Regional Service gala, “Jewish Roots of Fashion,” comes from a small town store that had a rich history.

Betty Bloch Kohn has lived in New Orleans since the 1940s, but she grew up in Napoleonville, where her parents owned the Leader Store before passing it along to her. It opened along Bayou Lafourche in 1890 with the motto “Quality and Service.” Her father, Maurice Bloch, had been a manager and jumped at a chance to buy the store.

“We were a department store, handling everything you could imagine,” she said, from furniture to clothes, shoes, appliances and jewelry.

They were part of the nearby Donaldsonville Jewish community, attending services at Bikur Cholim, which has long since closed and become an Ace Hardware Store.

Though their lives and careers were in New Orleans, they commuted weekly to Napoleonville, to be in the store. She said on Saturday nights, the store would be full as sugar cane farmers and workers would come by to cash their newly-received checks.

When they closed the store in 1990, Kohn said they wanted to give back to the town, so they donated the building to Nicholls State University, which sold it. The proceeds went to establishing the Betty Bloch Kohn Scholarship, the first scholarship fund for a female athlete at Nicholls. It is awarded to a full-time female athlete who maintains eligibility and a GPA of 3.25 or higher, for up to eight semesters.

Throughout their lives, they both were very active in numerous causes.

She has served on boards and in leadership roles at Touro Synagogue, the National Council of Jewish Women, the Jewish Community Center and the Touro Infirmary Auxiliary. She also was the Honorary Co-Chair of the Saks Key to the Cure Gala benefiting the Louisiana Cancer Research Center in 2015 and the JCRS Jewish Roots of Celebration Gala in 2016.

Her husband was a 1984 recipient of the prestigious Weiss Award as well as a recipient in 2002 of the L’Chayim Award, and he served on numerous boards in the Jewish and general communities, including a term as president of Touro Synagogue.

On March 15, Touro Synagogue is rededicating its newly-renovated sanctuary and honoring Kohn. Touro President Teri Hunter said she visited with Kohn last June when Kohn asked her what she would like to see happen at Touro. They both agreed that new seating, carpeting and refinished floors in the sanctuary would be nice, and Kohn and the Ira and Betty Kohn Foundation made it happen.

In 2015, Kohn established the Betty and Ira Kohn Camp Scholarship Fund at JCRS and is dedicated to supporting Jewish identity building through the camp experience.

While she did not attend summer camp, the Kohns were at the groundbreaking for the Henry S. Jacobs Camp in Utica, and their children and grandchildren were campers there.

Kohn, who is turning 95 just before the Gala, said she is “overwhelmed” by the honor. She explained, “We just enjoyed people and being active participants in the community.”

The gala will be on March 30 at the Marriott on Canal Street in New Orleans, with a cocktail hour and silent auction starting at 6:30 p.m. There will be a seated dinner and a style show presented by Dillard’s.

Over two dozen Jewish merchants and store owners from the soft goods and fashion industries in the region will be highlighted in the evening’s program book.

There will also be a drawing for a $5,500 sapphire and diamond bracelet from Lee Michaels Fine Jewelry at Lakeside Shopping Center. Tickets are $20, or six for $100, and one need not be present to win.

Tickets for the Gala event begin at $250 per person. For ages 35 and under, tickets are $100 each. Table purchases are available as well. Reservations and raffle tickets are available by calling the JCRS office at (504) 828-6334 or online.