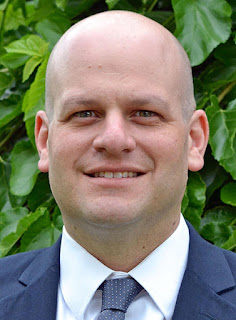 The same week that Bradley Philipson marked the 30th anniversary of his Bar Mitzvah at Touro Synagogue, he was named the new head of school at Jewish Community Day School in Metairie.

Search committee chair Michael Wasserman made the announcement on March 13. Philipson will succeed Sharon Pollin, who is returning to Oregon this summer after six transformative years for the school.

“I could not be more excited by the outcome of the efforts” of the search committee, Wasserman said. Philipson “is a highly experienced teacher and education leader with a passion for learning.”

Philipson comes to the school after being Upper and Middle School Principal at Young Audiences Charter School in Gretna. Before that, he was assistant head of school for academics and curriculum, and communications specialist at Country Day School in Fort Worth, Tex. He also taught at Metairie Park Country Day School, where he was also assistant principal in the Upper School.

“As a native New Orleanian, Brad is connected to the New Orleans Jewish community, and we are delighted that he made the decision to return to New Orleans and to make our community his and his family’s home,” said Carole Neff, Day School president.

“Though I have lived all over the country, growing up Jewish in New Orleans is an important part of who I fundamentally am,” Philipson said.

While he has a long career in education, he said it feels that those years are a prelude to the “symphony yet to be performed” at the Day School. “Pollin and the Board have built a team and a structure that would be the dream of any incoming head of school. They have created a school that is both wonderful in its current model and poised to evolve and grow into its next iteration.”

The school is opening its first-ever early childhood program, and this year expanded to its first sixth grade class since before the storm.

Pollin said Philipson “possesses a unique set of skills and experiences that I believe are exactly what JCDS needs now,” and there are “few individuals about whom I would feel as enthusiastic to welcome to JCDS” as Philipson.

Neff noted that the school has more than doubled in size under Pollin, and another 50 percent growth is anticipated in the next one or two years, “all of which could not have happened without Dr. Pollin at the helm.”

The school also announced that Philipson has been accepted to the prestigious Day School Leadership Training Institute under the auspices of the Jewish Theological Seminary with the support of AVI CHAI. The 15-month program, designed for new heads of Jewish day schools, focuses on Judaism, Education and Leadership with ongoing mentoring and the development of an ongoing peer network.