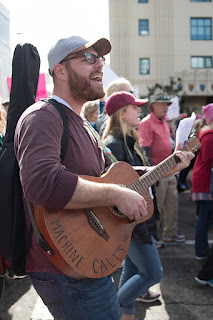 An internationally-known Jewish musician from California is hitting the road in a van and making his first tour of the South, and hopes to line up appearances in communities along the way.

Marshall Voit is a San Diego native, the son of a Reform rabbi and cousins with the Voits in Mobile. After a weekend at the Reform movement’s Greene Family Camp in Texas, he will be in the South from around April 17 to May 11, and is available for a wide range of services, including house concerts, Shabbat services, Passover Seders, synagogue music events, jam sessions, guitar and voice lessons, and more, from Louisiana to Georgia.

With a father who is a Jewish song leader, Voit has been singing his whole life, and started taking trumpet lessons at age 10. He was active in Hillel at the University of California Los Angeles, and was song leader and cantorial soloist at Wilshire Boulevard Temple.

After college, he went to Melbourne, Australia, as a Union for Progressive Judaism musician in residence and Jewish Life Fellow. He worked with a dozen congregations in Australia, three in New Zealand and one in Shanghai, China, where he led a Passover Seder and presented at Limmud China.

In 2013 he returned to San Diego to pursue graduate studies in ethnomusicology. He has toured the U.S. twice, done a 10-week residency in Cape Town, South Africa, and continues to do events in Australia.

After Seder with family in Mobile, he will be along the Gulf Coast, with an appearance on April 28 at the Unitarian Fellowship in Fairhope. He’ll gravitate further into Alabama and Georgia, appearing at First Existentialist Congregation in Atlanta, then will be in the Florida panhandle area. He hopes to line up Shabbat appearances while in the area.

In addition to his Judaic repertoire, he has an emphasis on social justice and folk-protest music.

Accompanying him in the van that he is converting into a mobile home is his little dog, Jackie, “the chillest pooch in the world.” After the Deep South, they will go up the Atlantic coast through Appalachia to Toronto, and then back south and west to San Diego.