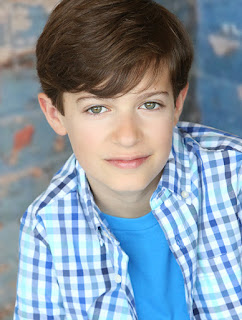 “Finding Neverland” follows the relationship between J.M. Barrie and the family that inspired “Peter Pan” or “The Boy Who Wouldn’t Grow Up.”

The 10-year-old Jewish actor playing Peter — and Jack — in the touring Broadway musical said he is living a dream he’s had for much of his young life.

The show will be at the coming to the Birmingham Jefferson Convention Complex Concert Hall, April 5 to 7.

“I knew after I saw my first show that this is what I wanted to do,” said Caleb Reese Paul, who lived the first six years of his life in New York City and attended many Broadway shows with his parents. “I have loved every show I have seen.”

Four years ago, Caleb’s family moved to Scarsdale, N.Y., and he started doing some school and community plays. A friend in his elementary school had been on the “School of Rock” tour, and her family recommended that Caleb attend auditions at a nearby theatre organized by casting agents.

One year ago, Caleb got an agent and a few auditions for shows. Last spring, after a few callbacks he landed his first national touring opportunity with “Finding Neverland.”

“It’s awesome,” he said. “I know it’s real but I feel like I am living a dream. I am so inspired by everyone in this show. They are so nice and accepting.”

The “Finding Neverland” tour started in Hershey, Pa., late last September. Caleb’s mother, Laura Paul, accompanies him on the tour and his father, David Paul, along with younger brother Hudson, who is following in big brother’s acting footsteps, come to visit for a few days when the show plays within driving distance.

“My mom teaches me while we’re on the tour,” using a curriculum she developed that also includes Hebrew School elements, Caleb said. He is looking forward to his Bar Mitzvah in less than three years. When at home, he and his family attend Kol Ami synagogue in White Plains. “And we get to visit home for a day or two when the tour comes nearby.”

Caleb said he relates to both of the characters he plays, as he alternates roles. They represent two sides of himself. “Peter keeps his thoughts to himself a lot and he reads a lot of books. Jack brings out my happy side. He has so much energy and loves adventure,” he added.

The “Finding Neverland” tour has given Caleb the opportunity to travel across the country. He said 90 percent of the places visited have been new to him and he’s never been to Birmingham or the Deep South.

“It’s exciting to see new places and meet new people,” said Caleb, who particularly liked California and the chocolate-smelling hotel in Hershey. “Plus it makes me happy when I see the people in the audience get so happy.

“Finding Neverland” is based on the Academy Award-winning Miramax motion picture by David Magee. The tour director is Mia Walker.

Caleb said he plans to go on more auditions after the tour ends in May, but “I am excited to be going to middle school and to be back home with my friends and family.”