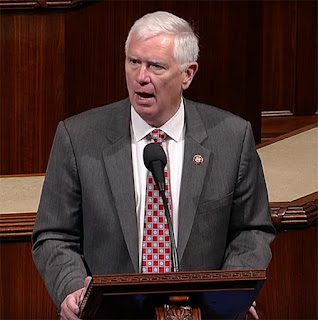 The Alabama Holocaust Commission and numerous allies stated today that they “strongly condemn” the March 25 remarks by U.S. Rep. Mo Brooks of Alabama, where he quoted portions of Adolf Hitler’s “Mein Kampf” in a speech on the U.S. House floor.

Brooks was speaking about special counsel Robert Mueller’s investigation on whether the Trump campaign colluded with Russia during the 2016 presidential election. He said that for two years, “socialist Democrats and their fake news media allies… have perpetrated the biggest political lie, con, scam and fraud in American history,” referring to the accusations of collusion as “a Big Lie.”

Brooks has continued to use the “Big Lie” theme in subsequent television and radio appearances, and in further remarks on the House floor.

In his March 25 speech, he quoted “from another Socialist who mastered ‘big lie’ propaganda to maximum, and deadly, effect,” reading a passage from “Mein Kampf” that spoke of how the masses more easily fall victim to a big lie than a small one.

He concluded, “America can either learn from history or be doomed to repeat it. When it comes to ‘Big Lie’ political propaganda in America, as the Mueller report confirms, America’s Socialists and their fake news media allies are experts and have no peers,” and Americans must reject them “or succumb to the danger that lurks, and horrific damage that results.”

In “Mein Kampf,” though, Hitler uses the term “big lie” to describe a Jewish “unqualified capacity for falsehood,” saying Jews were spreading the “big lie” in wrongly blaming a top German military commander for its World War I loss. He invoked the “big lie” accusation to portray Jews as deceptive traitors to Germany, making persecution, and later extermination, of Jews a matter of national self-defense.

In its response on April 3, the commission said it does not make political statements, but objects to Brooks using “Mein Kampf” and invoking Hitler’s name “to condemn those with whom he disagrees.”

The statement pointed out the origin of the “big lie” concept, adding that Hitler continued by saying Jews “know only too well how to use a falsehood for the basest of purposes. From time immemorial, however, the Jews have known better than any others how falsehood and calumny can be exploited.”

The commission said “facile comparisons” like Brooks’ remarks, “used in order to demean opponents and gain political capital, should be actively avoided. Using such rhetoric not only trivializes our past, as well as the victims of this genocide, but also cheapens our current political discourse and maintains a divisive rhetoric all too common at the present time.”

The commission’s response concluded with the hope that “our political leaders, whatever their party or political persuasion, should refrain from using Hitler, the Nazis, and the tragedy of the Holocaust in an effort to strengthen their public statements. Should such a strategy become the norm, then we as a society have learned nothing from the ills of the past and open the doors to the possibilities of repetition.”

The statement was coordinated by the commission’s chair, Dan Puckett of Wetumpka, who teaches at Troy University. Commission members and representatives for the Gulf Coast Center for Holocaust and Human Rights Education also signed it, along with a list of rabbis, ministers and the executive director of Faith in Action Alabama. David Meola, director of Jewish and Holocaust Studies at the University of South Alabama, signed it, as did renowned Holocaust scholar Rabbi Steven Jacobs, Aaron Aronov Chair of Judaic Studies at the University of Alabama.

Many others have also condemned Brooks’ remarks. The Democratic Jewish Coalition of America tweeted that it was “an egregious and deeply offensive example of anti-Semitism once again rearing its head in Congress… Where is the GOP outrage?”

The Anti-Defamation League tweeted that “It’s unconscionable for a member of Congress to demonize an opposing party by claiming it’s comparable to Nazism. The vicious Nazi regime was responsible for the murder of 6 million Jews and millions more. This is dangerous and @RepMoBrooks must apologize.”

On the House floor on April 2, Brooks continued using the theme, citing “the economic history of Germany’s Socialist experiment to confirm that Socialism is the mortal enemy of Free Enterprise and that Socialism inevitably replaces freedom, liberty and economic prosperity with government dictatorship, poverty, and death.”

He noted that “Socialist Democrats and their fake news media allies” objected to his March 25 remarks, “to explain what the Big Lie Propaganda Tactic is and how horrific the consequences can be for those seduced by it.”

He continued, “Germany’s Socialist Party’s Big Lie killed tens of millions of people in the Holocaust and World War II, making it the most horrific and deadly Big Lie in history!”

Brooks has referenced “Mein Kampf” before. At a Madison town hall meeting in 2015, during debate on the Iran nuclear deal that was regarded as a major threat to Israel, Brooks compared Iran’s “really aggressive statements” to Nazi Germany, then asked “Don’t you wish people before World War II had read ‘Mein Kampf’ and paid attention to it and stopped it from ever happening?”