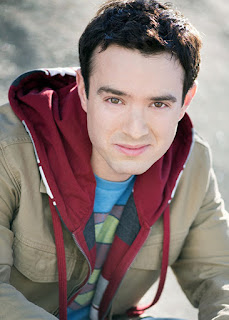 Rick Desloge grew up in the Jewish community in St. Louis, went to school in Indiana and lives in New York City, but he’s every bit a Jersey boy.

Desloge plays Joe Pesci, Hal Miller, a deejay and even a French rapper in the Tony-award-winning musical “Jersey Boys,” coming to the Birmingham-Jefferson Convention Complex on April 30 and May 1, as a part of the Broadway in Birmingham series.

“I’m inspired to share the story of stalwart dreamers who persist,” said Desloge. “That’s what I came up with for my bio. It’s true about Frankie Valli and The Four Seasons. It’s also true about me.”

“Jersey Boys,” which won the 2006 Best Musical Tony Award and 2006 Grammy Award for Best Musical Show Album, tells the behind-the-music story of Frankie Valli and The Four Seasons. They were just four guys from New Jersey until they sang their first note. They had a sound nobody had heard before and the radio just couldn’t get enough of.

But while their harmonies were perfect on stage, off-stage it was a different story. “Jersey Boys” features their hits, including “Sherry,” “Big Girls Don’t Cry,” “Oh What A Night” and “Walk Like A Man.”

Desloge’s mom is Jewish and his dad is Catholic, but he and his brother were raised Jewish in the Gateway City. Desloge was involved in the St. Louis Jewish community and had his Bar Mitzvah there.

Growing up, he did not think about music from New Jersey, but rather hockey, soccer and baseball jerseys as a multi-sport athlete.

“At my high school it was cool to be a ‘jock’ and be in choir. Then I saw a touring production of “Mamma Mia” at the Fox Theatre in St. Louis. I saw how much fun they were having and how wonderful it is to be able to entertain people,” said Desloge. “It was then that I decided I wanted to pursue a career in musical theatre.”

He would earn a degree in musical theatre from Indiana University. While in Bloomington after his sophomore year, he earned an opportunity to do professional theatre with a Summer Stock group outside of Kalamazoo, Mich. After his junior year, he did a Summer Stock production of “Grease” in his hometown of St. Louis.

Then at the end of his senior year, everyone in the program got to showcase their talents to agents, casting directors and company directors in New York City. Desloge didn’t get something right away, but after graduating and a couple months back in St. Louis, he took a leap of faith and went to New York City to try to make a career in musical theatre.

“I would get up early and go on auditions. It was hard work but this was my dream and I was determined to make it,” he said.

In 2008, he earned a lead role in “Treasure Island: A Musical Adventure” at a professional theatre in Lancaster, Pa., and the show also went to Indianapolis. Desloge got on equity and joined the union. “That really opened some doors,” he said.

He would earn roles in regional theatre, including “Joseph and the Amazing Technicolor Dreamcoat” and “Forever Plaid.”

A few years ago, he joined the national tour of “Wicked.” It is during that show that he met his now-fiancée Cassie Otenka. “She also has a Jewish mom and a Catholic dad,” said Desloge. “We both have never been to Israel but we applied for and were accepted into the Honeymoon Israel program. It’s a subsidized trip. We’re going in November and we can’t wait to experience Israel.”

In mid-April, Desloge was on a two-week break from “Jersey Boys” and was able to celebrate Passover at home in New York City with Otenka. “It is hard being apart when one or both of us is on tour, but we try to see each other as often as we can at home or on tour. Plus technology today makes it easier to stay close,” he said.

Between “Wicked” and “Jersey Boys,” Desloge has visited 46 states on those rigorous tour schedules. This is a return trip to Alabama, as “Jersey Boys” has played Montgomery and Huntsville. The tour bus stopped in Birmingham and Desloge visited his good friend from St. Louis and Indiana University, Ross Bodner, who is also Jewish and head chef at Back Forty Brewing Company.

“We only have a couple of days in Birmingham, but I hope to have a few hours to explore the city and meet some people in the community,” said Desloge. “Jersey Boys” “has had such an incredible life, and this show is so much fun to be a part of. The audiences really respond to it. ‘Jersey Boys’ has great music and a great story. “