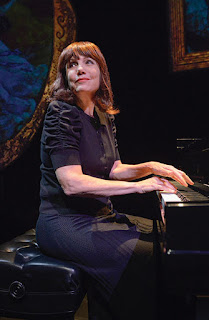 Le Petit Theatre in New Orleans is featuring “The Pianist of Willesden Lane” in May, starring internationally acclaimed pianist and storyteller Mona Golabek.

Based on the book “The Children of Willesden Lane” by Golabek and Lee Cohen, the play is set in Vienna in 1938 and in London during the Blitz, and tells the true story of Golabek’s mother, Lisa Jura, a young Jewish musician whose dreams are interrupted by the Nazi regime. A pianist, Jura dreamt of her debut at the Musikverein concert hall, but the Nazi regime and her rescue as part of the Kindertransport changed everything for her — except her life-saving passion for music.

Golabek learned music from her mother, and her father received the Croix de Guerre for his role in the French Resistance. Golabek is a Grammy nominee who has been the subject of several documentaries, including “Concerto for Mona” with conductor Zubin Mehta.

Golabek founded Hold On To Your Music, a foundation devoted to spreading the message of the power of music. With the help of the Milken Family Foundation, Facing History and Ourselves, and the Annenberg Foundation, she created educational resources which, with her book, have been adopted into school curricula across America. Additional educational partnerships have been formed with the Los Angeles Museum of the Holocaust, Mashplant and the USC Shoah Foundation to tell her mother’s story.

There will be a student matinee on May 10 at 10 a.m. On May 12 there will be a Behind the Curtain question and answer session after the show.

A Book Club will discuss “The Children of Willesden Lane” on May 19 at 1 p.m. It is free and open to the public. Industry Night will be May 20 at 7:30 p.m., with all seats $25. Bike Night will be on May 23, with BikeEasy providing secure, complimentary bike valet service starting at 6:30 p.m.

“The Pianist of Willesden Lane” opens on May 10 and runs through May 26. Regular ticket prices range from $25 to $55. Student tickets are always $15. Group discounts of 10 percent on groups of 10 or more are available. Single tickets are available by calling the box office weekdays from noon to 5 p.m. or online anytime.

The production is underwritten by The Helis Foundation and the General Fund and the Leonard E. Prelutsky Memorial Fund of the Jewish Endowment Foundation of Louisiana.