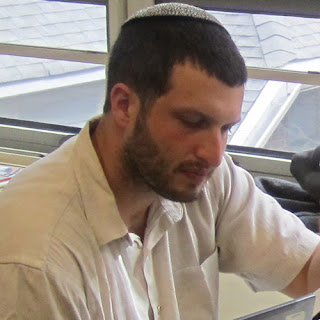 This summer, Rabbi Joshua Pernick will become the new rabbi at Metairie’s Beth Israel, but for a preview, there is a meet and greet there on April 28 at 7 p.m.

He will succeed Rabbi Gabe Greenberg at New Orleans’ modern Orthodox congregation after being ordained this coming month at Yeshivat Chovevei Torah.

A native of Nanuet, N.Y., Pernick is the son of Rabbi Daniel Pernick, who has served Beth Am Temple, a Reform congregation, since 1985.

His oldest sister, Sarah, is married to Rabbi Joel Dinin, a 2015 graduate of YCT who now serves a congregation in Milwaukee.

Pernick studied sociology at Brandeis University. While there, he went from working at the Conservative movement’s Camp Ramah in Nyack, N.Y., to a semester in Ghana, where there was one other Jewish participant.

Peppered with questions from people interested in learning about Judaism, he realized how much he needed to learn, sending him down this path.

After graduating from Brandeis, he decided to do non-profit work, working with Americorps in Charleston, S.C., where he is considered an “adopted native.” Desiring greater interaction with youth, he swapped to working with pre-schoolers. He taught preschool at Addlestone Hebrew Academy in Charleston, then at the Boston Jewish Community Day School while working on a master’s in Jewish day school education at Brandeis.

He spent time at the Pardes Institute of Jewish Studies, then taught for a year at Atlanta Jewish Academy before entering YCT.

He served as student rabbi of Shaarey Tphiloh in Portland, Maine from 2016 to 2018, receiving a grant from the Crown Foundation, in partnership with YCT, to create an expanded community role with Portland’s Jewish Community Alliance.

He interned with Rabbi Adam Scheier at Congregation Shaar Hashomayim in Montreal in 2017-18, and this past year has been with the Durham Orthodox Kehillah in North Carolina.

He also is a curriculum consultant to the Global Day of Jewish Learning.

The trip included Shabbat services, where he did the Haftorah and gave a d’var Torah.

Pernick also is in the Fellowship for Rabbinic Entrepreneurs, developed by M2: The Institute for Experiential Jewish Education and the Hillel Office of Innovation. The fellowship is for rabbinical students of all denominations who look to build the communities where they will serve, learning the skills “to design, develop, and scale new Jewish communities,” building “new models of Jewish life” and helping “shape the rabbinate of tomorrow.”

In a year of unusual turnover, Beth Israel is one of three congregations in the New Orleans area that will welcome new rabbis this summer.