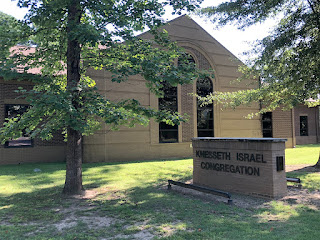 There will be a Mountain Brook zoning commission meeting on June 3 at 5:30 p.m. to discuss rezoning the KI property to a commercial designation so the property’s sale can go through and a medical clinic can open in that location.

The rezoning is seen as the final step for the state’s only Modern Orthodox congregation to complete a process that has been in the works for seven years, as it has struggled financially in its new building.

Once the building is sold, the congregation plans to move across the street into the rabbi’s home, which the congregation owns free and clear, with the basement and first floor being used for congregational activities, and the upstairs would be the living quarters for the rabbi.

Gabriel and Sarah Rezonzew began the petition drive to “save” the building, saying they are new members who love the synagogue. “This is one of the most accepting, non-judgmental places of worship we have found, and we are honored to be a part of this wonderful community,” she said.

As of May 5, there were 110 signatures on the petition, which is addressed to Mountain Brook Mayor Stewart Welch III, city council members and Temple Emanu-El.

Rezonzew stated there were dozens of nearby families concerned that the rezoning would negatively affect their property values, and that moving out of the building “could also bring about the demise of the congregation.”

In a statement to members on May 3, however, the KI board said that they support owner Fred Friedman’s “prerogative to sell the building,” which has been on the market since 2016.

Two years ago, there was an understanding “that he would maintain our lease and help subsidize us in the building until he was able to sell it, at which time we would be prepared to leave — a point we reaffirmed at last year’s congregational meeting. We are grateful for this arrangement, and for all the ways in which he has helped sustain our congregation.”

In 2004, the congregation started a rebuilding project at its location on Montevallo Road, but issues with that property caused them to start looking elsewhere. They voted in December 2005 to move to Overton Road, dedicating the new building in 2007.

The congregation, then with 100 member families, raised $5.4 million for the new facility. The real estate collapse of 2008 hampered the sale of the Montevallo Road property, which ultimately brought in far less than was anticipated. That, combined with other factors, led to an announcement in the summer of 2012 that there was $3 million still owed to the bank on what had become an $8 million project.

Around that time, Beth Israel in Gulfport and Beth Israel in Metairie built new buildings to replace facilities made unusable by Hurricane Katrina and its aftermath. Both projects were far smaller than Knesseth Israel, though the Metairie congregation has twice the membership.

Knesseth Israel would remain in the building, which was also made available for other community groups. Temple Beth-El used it as an alternate religious school location, and when Collat Jewish Family Services started its CARES program in 2015, it was housed there.

In 2016, the property went back onto the market, as KI’s then-president Ken Ehrenberg stated the building had become “a financial burden to its owner.” For the congregation, the expenses of being in such a large facility were also unsustainable, and moving into the rabbi’s house would also help balance the congregation’s budget.

Some in the community wanted other local Jewish institutions to consider purchasing the building. Temple Beth-El did a study, but the 500-family congregation decided the facility did not meet its needs.

With the uncertainty over how long it would take for the building to sell, Beth-El stopped using it as a satellite location, and the CJFS CARES program moved out last year.

After a couple of sales fell through, in July 2018 the congregation held a meeting at which it was announced that there was a potential buyer and the sale was expected to close that October, but the process has been delayed pending the zoning approval.