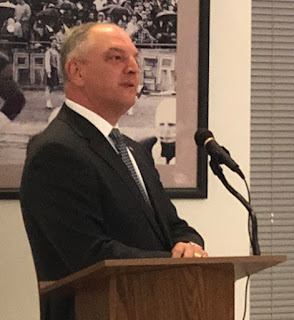 Delek US, the American operations of Israel’s Delek energy conglomerate, announced on May 23 that it will invest $150 million to enhance its refinery in Krotz Springs, La., with a series of projects over the next five years.

The refinery, which employs 200, will have 30 new direct jobs and 48 new indirect jobs as a result of the investment. The company’s enhancement projects at the refinery will include infrastructure improvements, facility construction and renovations, and new machinery and equipment.

The plan was announced by Edwards and Delek US President and CEO Uzi Yemin on May 23. During the trade mission in October, Edwards met with Yemin, as energy was an emphasis of the trade mission, and they discussed how the company’s operations in Louisiana might be supported for future growth.

The Krotz Springs refinery manufactures gasoline, diesel fuel, petrochemicals and other products, with a capacity of 74,000 barrels per day. Built in 1980, it is one of the country’s newer refineries.

“This initiative at the Delek US refinery in Krotz Springs builds on Louisiana’s role as energy leader in the U.S.,” Edwards said. “These projects will create new high-paying jobs for our Acadiana Region, and we look forward to Delek’s continued growth and success in St. Landry Parish.”

“That Delek is announcing major new investments in facilities and jobs in Krotz Springs less than a month after the completion of the company’s largest-ever capital project is a testament to our faith in the refinery and the team that runs it,” Yemin said. “And I’m pleased that our enhanced partnership with the State of Louisiana, St. Landry Parish and the Port of Krotz Springs will protect the environment and further strengthen the refinery’s viability.”

“These investments in the Krotz Springs location, on the heels of their new $138 million alkylation facility, further reinforces the Delek commitment to the long-term productivity of this facility and to being an anchor employer for our area economy,” said Executive Director Bill Rodier of St. Landry Economic Development.

Delek had considered sites in Texas and Arkansas. Louisiana offered an incentive package that includes a performance-based grant of up to $7.5 million, payable over four years, for enhancing the dock terminal that serves the company at the Port of Krotz Springs on the Atchafalaya River. The company also is expected to utilize the state’s Quality Jobs and Industrial Tax Exemption programs.

On May 15, Edwards was joined by Chancellor Rick Bateman of Bossier Parish Community College and Chief Operations Officer Bryan Dickens of Cybint Solutions Inc. to announce a new cyber center partnership at the Northwest Louisiana college. A Memorandum of Understanding was signed in Bossier City, committing the parties to development of a cyber center that will be located at Bossier Parish Community College’s Center for Advanced Manufacturing and Engineering Technology.

The BPCC building will host ongoing cybersecurity training, credential coursework, and field exercises on a virtual cyber range for in-person trainees and online participants across the state and around the world.

The ceremony came as delegates from the National Governors Association met in Shreveport for the 2019 National Summit on State Cybersecurity.

Cybint Solutions is based in New York but has its roots in cyber solutions developed by Israeli Defense Forces veterans and industry professionals.

“This is an exceptional honor for us,” said Cybint Solutions CEO Roy Zur. “Our collaboration with BPCC has been impactful and our entire organization has been gratified to see the enthusiasm and passion for cyber learning in this region. We look forward to the next phase.”

“From all of our research, we found that Cybint was the premier leader in providing a platform for hands-on cyber security education, training and simulation,” Bateman said. “To establish such a partnership with Cybint is a win for everyone involved. Our partnership will have a far-reaching impact that benefits not only our students here at BPCC, but also students, industry partners and educational institutions across the state of Louisiana.”

The partnership led by BPCC and Cybint will reach many cybersecurity levels — from cyber literacy skills for students, to cutting-edge modules for professionals dealing with advanced cyber threats, to training for manufacturers seeking to protect their production, to full-scale training exercises on a virtual cyber range.

President Craig Spohn of the Cyber Innovation Center said the new partnership at BPCC will benefit the U.S. military as it modernizes missions in the future. Barksdale’s Global Strike Command could be a key beneficiary.

“This partnership between BPCC and Cybint Solutions should be considered more than just cyber education,” said Spohn, who serves as chairman of the Louisiana Cybersecurity Commission created by Gov. Edwards in 2017. “It should be considered an asset that can contribute to next-generation warfighting. Almost every military action is going to include a cyber element in the future. Assets like this partnership will help us benchmark where we need to go, and we can then create the environments we need from a software and visualization standpoint.”

Four months ago, an Israeli-based software company, Check Point Software, set up a cybersecurity partnership with Stephenson Technologies Corp. at Louisiana State University, establishing operations in Baton Rouge. That partnership will result in the Innovation and Integration Lab.

About two dozen went on the mission, which left Louisiana on Oct. 27. Participants held 22 meetings over the course of four days.

Cyber-security is a major emphasis for Edwards, who noted that 40 percent of private sector investment in cyber security takes place in Israel.

Another area of emphasis is Israel’s development of gas fields in the Mediterranean, a field where Israel doesn’t have much experience, but Louisiana does.