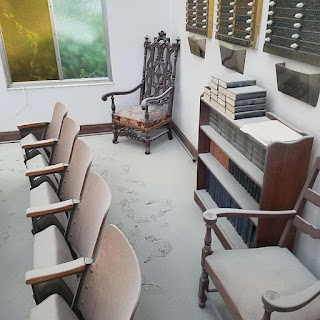 When members of the Ware County High School chorus heard that the only synagogue in Waycross, Ga., had been vandalized, memories of performing there each year for the Morris Jacobson Brotherhood Ceremony spurred them to action.

On June 7, dozens of students and other community volunteers spent the morning inside and outside the Waycross Hebrew Center, working with congregants to clean up the damage and do some general sprucing up.

On May 29, police responded to a tip from a passerby that there was damage at the building. An individual had broken a window to gain access to the building, ransacked and took items from the kitchen and discharged a fire extinguisher throughout the sanctuary. Two kitchen windows and a window in the men’s bathroom were broken, and a side door was unlocked.

A menorah was damaged, but the ark and Torahs were not touched. Al Jacobson, who leads the congregation, said that makes them think it was a teenager.

Dozens of footprints — and paw prints apparently from a small dog — tracked through the sanctuary in the fire extinguisher powder. There were also blood stains, supposedly from the burglar getting cut on the window.

The Waycross Police collected evidence and is looking for suspects. “The detectives have quite a bit of evidence to work on, but no suspect,” Jacobson said.

Bhumi Patel, a senior at Ware County High School, started assembling choir members and alumni, saying on Facebook “I think it would be a nice gesture for us to let our local congregation know just how much we love and appreciate them.”

That turned into a planning meeting on June 5, where the June 7 effort was coordinated.

Greta Thomas, choir director, said “when we heard about the events that happened, it was just tragic. And we wanted to do our part.” While the congregation had managed to get some of the interior cleaned on their own, she said “there’s still a lot in there.”

In addition to cleaning the interior, volunteers cleaned up outside, doing landscaping and working on the Morris Jacobson Brotherhood Garden. Their work “was outstanding,” Al Jacobson said.

With the choir performing there each year, Thomas said, “we consider the people of the congregation to be like family,” a sentiment that was echoed by several students in a Facebook video posted at the beginning of the cleanup.

The Jewish community of Waycross officially organized in the 1920s, and built their synagogue in 1952. With around 35 families at its peak, the congregation was never large enough to have a full-time rabbi. Today, Jacobson said, there are only two Jews in the immediate area, two more 26 miles away and only five within 75 miles. “We also have about 5 to 10 non-Jews that attend Friday night services on a regular basis. But we are holding our own.”