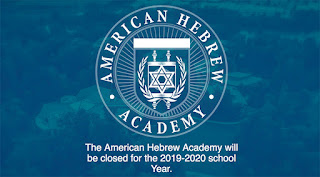 On June 11, an unexpected email shocked the American Jewish community as the American Hebrew Academy announced the “end of the Academy Era” after an “18-year dream.”

The email from the school’s chief executive officer, Glenn Drew, stated that “Due to insufficient growth in enrollment and our inability to secure adequate funding to cover future school expenses, the American Hebrew Academy is regretfully announcing that classes for the 2019-2020 academic year have been canceled.”

The school opened to much fanfare on Sept. 10, 2001, mortgage-free, as the only pluralist Jewish boarding high school in the country, the product of visionary Maurice “Chico” Sabbah and built on a 100-acre campus in Greensboro, N.C. Sabbah died in 2006.

Though it was announced that Sabbah was launching the school with $100 million in contributions, news of the closing focused attention on the school’s large budget deficits and inability to attract the numbers needed to sustain itself.

The closing came as a shock, as up until the end, the school was embarking on enhancements to its program.

In early May, the school announced “two new important academic initiatives for the 2019-2020 academic year which will expand the offerings available to new and returning students.” In August, the school was to become a candidate school for the International Baccalaureate Diploma Program, “a natural progression in the Academy’s 18-year evolution as a college prep school.”

The school also announced that their collaboration with Guilford College would be expanded this fall to increase the number of college courses available to Academy students, so “highly motivated students” could earn a year’s worth of college credits before graduating from the Academy.

Sabbah was born and raised in New York, with a Sephardic father and Eastern European mother. He was an irrigation specialist in the early days of Israel and served in the Israeli army, then served in the U.S. military in Korea.

He worked in the reinsurance industry, and in the early 1970s he moved to Greensboro and his business “grew beyond his wildest expectations.” He started a legacy of quiet, behind-the-scenes philanthropy.

After his parents died and he said Kaddish daily, with students from the local Jewish Day School assisting with services, he set out to establish a Jewish high school to rival the prestigious northeastern prep schools, with facilities to match. One estimate had Sabbah spending $10 million on the land and $100 million on the buildings. The athletics complex was said to cost over $11 million.

The school was referred to as Sabbah’s dream, but in the June 11 email, Drew said “It has been a dream fulfilled for 18 years, and it is a dream that must unfortunately come to an end.” Drew is Sabbah’s nephew.

Though there was much fanfare at the school’s beginning, the second day the school was open would bring huge challenges to Sabbah. His reinsurance company, Fortress Re, was involved in reinsurance of airplanes, and each of the four airliners used in the Sept. 11, 2001, terror attack was reinsured by him through three Japanese companies.

When his company could not pay its share, the Japanese companies filed suit for over $1 billion. Fortress Re ultimately had to pay $400 million, and it took a while for the school to be separated from the legal proceedings, as there were accusations that funding which should have been in reserve for claims had instead gone to the school. That case was settled in 2005.

While the school was built for 400 students, the final year had an enrollment of 134. A few years ago, the school dropped the term “pluralistic,” as Drew said it was too easy to misinterpret. The school also started to emphasize attracting students from around the world to help boost the numbers.

With the closing, students enrolled for next year suddenly had nowhere to go, and faculty members found themselves unemployed at a time when most schools had already set their faculty for the coming year.

Ben Gamla Preparatory Academy in Hollywood, Fla., said it would take in students affected by the closure. Ben Gamla is not a boarding school but would work with students to find housing, and is the only Hebrew English charter high school in the U.S. As such, there is no tuition charge.

Salem Academy in Winston-Salem is opening its doors to female students from AHA.

When the school opened, it was said that there was money in the bank to keep it running for at least 10 years. In the immediate aftermath of the closing, news coverage showed huge deficits in the school’s budget in recent years.

John Newsom of the Greensboro News and Record tweeted that on the higher-education beat, “I’ve seen some schools in financial distress. This, tho, wow.”

In the previous year, contributions were listed at just under $3 million, for total revenue of $7.6 million against expenses of $17.3 million.

American Hebrew Academy listed 157 employees on its form, with total salaries at $5.5 million before benefits and payroll taxes.

For comparison, there are three Top-75 boarding schools in the region. The niche.com ranking had American Hebrew Academy ranked 82nd.

Indian Springs School, just south of Birmingham, has 315 students, with one-fourth of them boarding. The school reports 121 employees, with revenue of $10.15 million, $9.6 million from tuition, and $11.75 million in expenses.

The compensation package for the head of school is just over $300,000, with total salaries at $3.9 million.

Asheville School in North Carolina has 294 students. The school lists 159 employees and expenses of just under $18 million in 2017, with revenue of $25.6 million, $14 million of which was from tuition.

The head of school’s compensation package is listed at $283,000, with total salaries just under $5.7 million.

Another prominent boarding school, Webb School near Knoxville, has about 300 students. Their filing shows 172 employees and revenue of $12.3 million, over $9.3 million from tuition. Expenses were $11.7 million, including salaries of $4.3 million and a headmaster package of $380,000.