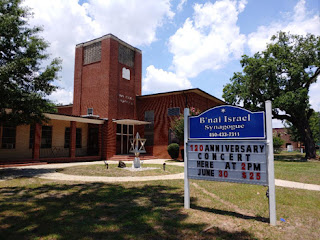 A schedule of events has been set throughout the weekend of June 28 to mark the 120th anniversary of B’nai Israel in Pensacola, the sixth-oldest Jewish congregation in the state.

Bear is musical director of HaZamir Long Island and hazzan of Temple Gates of Prayer-Shaarei Tefillah in Flushing, N.Y. He was the first singer to perform a concert of Yiddish music at Ellis Island, and was featured in the film “100 Voices.”

The daughter of Cantor Jacob Goldstein, Goldstein performed with the Goldstein Family Singers during her childhood in St. Paul, Minn., then pursued opera. She is cantorial soloist of Sinai Free Synagogue in Mount Vernon, N.Y.

Goldstein is known for her dedication to new works and to Jewish music, and to the preservation and recording of her father’s Choral masterpiece “Shalom Ba-Olam” with Transcontinental Music. An increasing part of her work is devoted to recitals of Yiddish song.

Bear and Goldstein have performed together at numerous Cantorial Assembly concerts across the country.

Joining them will be Greg Watson, who was cantorial soloist at Temple Beth El for 13 years and is a veteran Pensacola Opera performer. He was also the director of a Jewish choral group that drew members from both B’nai Israel and Temple Beth El.

Doors will open at 1:30 p.m., with the concert at 2 p.m. A reception will follow, along with an opportunity to meet the performers. Tickets are $25 and are available through the congregation’s website.

The weekend will begin with a 3 p.m. public event at Voices of Pensacola Multicultural Center, where artifacts will chronicle the congregation’s history. Enlarged photos of the congregations 12 stained glass windows will be part of the display.

When B’nai Israel was formed in 1899, Pensacola became the first city in the state to have more than one synagogue. Pensacola’s Beth El, founded in 1876, is the oldest Jewish congregation in Florida.

B’nai Israel was formed by 11 men, led by first congregational president Alex Lischkoff, who were looking for a more-traditional alternative to the Reform practices at Beth El. They established an Orthodox congregation and started meeting in the vestry room at Beth El’s building on Chase Street.

The congregation then met at the Oddfellows Hall at Baylen and Belmont, which congregants later discovered was also a meeting-place for the local Ku Klux Klan. The Ladies Relief Society was founded in 1920, then added the Ladies Auxiliary in 1928. They merged in 1941. A Young Judea youth group was established.

As increased immigration from Eastern Europe brought additional traditional Jews to the area, plans were made to establish a building. In 1923, a house at 400 North Barcelona was purchased. The first floor was the sanctuary, with a mechitzah, and the second floor was the rabbi’s residence.

With additional growth in the early 1940s, plans began to replace the building with something that looked like a synagogue. The Silberman family left a large bequest to the congregation for a new building, and ground was broken at the current site on Dec. 2, 1953. The dedication was held in September 1954, with Rabbi J.L. Holzman as spiritual leader and Abe Levin, for whom the social hall is named, as president.

A year after the move, the congregation followed a trend among many Southern Orthodox congregations and joined the Conservative movement.

Synagogue member Joe Rosenbaum digitally converted 16mm films he made in the 1950s during the construction of current B’nai Israel Synagogue in 1953 and the 1954 dedication of the new building. These videos and a display of the original Ark and other historical items are on exhibit at the University of West Florida’s Voices of Pensacola facility in downtown Pensacola.

The current Ark was completed in 1961, and the artistic gates were designed by Harry Ordon.

A series of 12 hurricane-proof art glass windows in the sanctuary, depicting Torah and Jewish festivals, was dedicated in 2001. In 2014 the congregation wrote a new Torah scroll, and current Rabbi Samuel Waidenbaum arrived in May 2017.