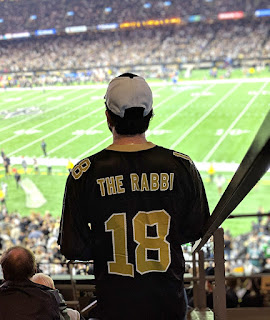 Football is religion in the South, and few places have a higher concentration of faithful devotees than New Orleans, where even the team name has religious overtones. That can lead to the occasional religious conflict — this year, the Superdome matchup between the Saints and the Dallas Cowboys is on the first evening of Rosh Hashanah, Sept. 29. With a 7:30 p.m. kickoff.

While Gates of Prayer in Metairie is having its usual service at 8 p.m. and Rabbi David Gerber “assumes” everyone will be there instead of at the game… just in case there are some who will be religiously conflicted, Gates of Prayer will offer a “Sinners and Saints” Rosh Hashanah service at 5 p.m., on the terrace at Stone Pigman law firm, about three blocks from the Superdome — walking distance, as would be traditional.

Gerber said he started getting calls immediately after the Saints schedule for the season was released, with the usual question being “am I a bad Jew if I go the Saints game instead of services?” followed by a promise to attend the next morning or do “extra atonement on Yom Kippur.”

There was no thought given to changing the service time because “Rosh Hashanah was scheduled before the NFL,” Gerber said, “but we decided we could meet people where they are.”

The full Gates of Prayer clergy will lead the service, which will include blowing the shofar, and “apples (cider) and honey (lager).” Those attending the service can dress for the game.

Tickets are free, but very limited due to space. A waitlist will be created if needed, with Gates of Prayer members receiving priority.

A similar conundrum occurred in 2013, when the “Game of the Century” revenge match of the University of Alabama at Texas A&M fell on Yom Kippur. Johnny Manziel was the Texas A&M quarterback who had stunned the Tide in Tuscaloosa the year before, and Birmingham’s Temple Emanu-El made national headlines for declaring the congregation a “football-free zone” for the day in deference to those who were taping the game for after the holy day.

Mike Slive, commissioner of the Southeastern Conference, did not attend the highly-hyped game, electing to attend services at Emanu-El.