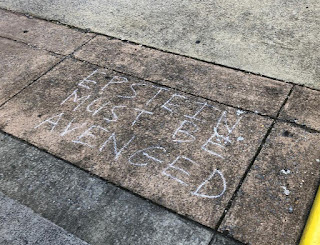 “Epstein Must Be Avenged” was scribbled in chalk on the ground next to Temple Emanu-El and Temple Beth-El on Birmingham’s Southside. The community’s Reform and Conservative congregations are two blocks apart.

The Emanu-El message was scrawled on the driveway leading to the Collat family entry, while the one outside Beth-El was near the south entrance on 21st Way.

According to Emanu-El Rabbi Adam Wright, the incident took place during the oneg following Shabbat evening services on Aug. 9. Surveillance cameras were able to capture an image of the suspect, described as a white male.

It is assumed that the Beth-El graffiti was done around the same time.

Birmingham Police are investigating, and security was stepped up for Aug. 10 morning services, and Beth-El has a Tisha B’Av service scheduled for the evening.

By this morning, the graffiti had been removed.

In addition, Mountain Brook police were alerted and asked to visit Knesseth Israel and Chabad, which are in their jurisdiction, in person due to Shabbat.

Epstein was accused of running a sex ring that featured underage girls, and catering to very wealthy and famous people, especially at his island retreat. Numerous entertainment and political figures, including Presidents Bill Clinton and Donald Trump, have been linked to him.

Epstein was arrested on federal charges on July 6 and was being detained at the Metropolitan Correctional Center in New York City. At 6:30 a.m. on Aug. 10 — hours after the graffiti incident — Epstein was found in his cell, dead of an apparent suicide.