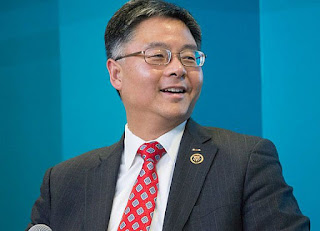 United States Representative Ted Lieu, a California Democrat, is backtracking from a dual-loyalty trope he tweeted on August 15 after Israel decided not to allow a visit to the territories by Reps. Ilhan Omar and Rashida Tlaib.

Among his targets were Rep. Mo Brooks of Alabama and Rep. Steve Scalise of Louisiana, though most of the headlines came from a similar tweet to the U.S. ambassador to Israel, David Friedman.

After Friedman said the U.S. “supports and respects” Israel’s decision and that Israel “has every right to protect its borders against those activists in the same manner as it would bar entrants with more conventional weapons,” Lieu tweeted Friedman, saying “You are an American. Your allegiance should be to America, not to a foreign power.”

He added that Friedman should be defending the right of Americans to travel to other countries. “If you don’t understand that, then you need to resign.”

On a CNN appearance later that day, Lieu twice reiterated his call for Friedman to resign, “because he doesn’t see to understand that his allegiance is to America, not to a foreign power.”

Brooks expressed his support of Israel’s decision, saying on Twitter, “Like many nations, Israel bars enemies from entering Israel. How can anyone disagree with that? Israel bans Reps. Ilhan Omar and Rashida Tlaib because they hate, want to hurt, maybe even destroy, Israel. I respect & support Israel’s sovereignty & right to exist.”

Lieu responded to him with “A reminder that you are an American Member of Congress. Your allegiance should be to America. We are Americans first. You should be defending the right of Americans to travel to other countries. Get it?”

Lieu wrote a similar response to Scalise’s defense of Israel at the Illinois State Fair’s Republican Day, ending that tweet with “If you don’t understand that, you should find another line of work.”

He also complimented Rep. Justin Amash of Michigan “for understanding that, as an American Member of Congress, your loyalty is to America, not to a foreign government.”

Shortly after he tweeted the other members of Congress, he removed the tweet he had sent to Friedman. “It has been brought to my attention that my prior tweet to @USAmbIsrael raises dual loyalty allegations that have historically caused harm to the Jewish community. That is a legitimate concern. I am therefore deleting the tweet.”

In response to a tweet from the Zionist Organization of America, Lieu admitted writing the tweet, adding “I should have been aware at the time I wrote the tweet that, as applied to Amb Friedman, it raised dual loyalty issues that have historically harmed the Jewish community. I’m sorry for writing it.”

While he deleted his tweet to Friedman, the ones to his non-Jewish colleagues remain on his feed.