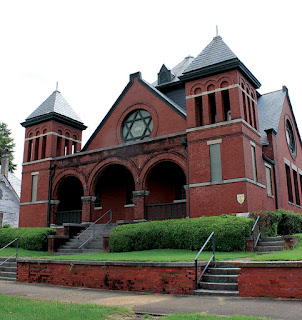 It’s a common concern for synagogues that are in historic buildings — keeping the roof in good condition, and running the occasional capital campaign when repairs are necessary.

But in Selma, where Ronnie Leet goes to Mishkan Israel’s 120-year-old building after every rain — just to make sure — the historic Jewish community is holding on with just four remaining members.

Nevertheless, with assistance from a professor at Old Dominion University who had no previous ties to Selma, and a regional filmmaker, Mishkan Israel is embarking on a major campaign to raise money to stabilize the structure, then turn the building into a combined synagogue, event space and historical resource for one of the epicenters of the civil rights struggles from the 1960s.

As part of the effort, a GoFundMe page has been set up with a goal of $800,000, which would finally deal with the building’s original roof and update the original 1899 wiring, a far-outdated knob and tube system. After that is accomplished, the total campaign will total at least $7 million to create the Jewish Legacy center, including an endowment component.

“If we can get the roof replaced and the electrical updated, that will buy us time,” Leet said. The ultimate goal is “complete restoration, setting up a museum for our artifacts and a Jewish cultural center to tell our story.”

The museum component will be in a house next door that the congregation purchased when it became available a few years ago.

Leet said “we’ve been talking about it since 1997,” when the Barton family in Nashville organized a Selma Jewish reunion, Home for the Holidays, to spur interest among those with Selma roots in helping the congregation. A second Home for the Holidays took place over Rosh Hashanah 1999, with the Extended Family Congregation holding a centennial celebration for the building.

Fundraising from those reunions enabled the congregation to deal with a leak that produced mold and mildew on a wall about six years ago. “You can’t let that stuff go,” Leet said.

Had it not been for the money from the reunions, “the building might have fallen in by now, because of the roof,” Leet said.

A few years ago, two brothers in Maryland whose families have Selma roots decided to have their Bar Mitzvahs in the building, and raise funds for restoration.

In 2015, when Selma was commemorating the 50th anniversary of the Bloody Sunday events, a major event filled the Mishkan Israel sanctuary. Among the speakers was Susannah Heschel, daughter of Rabbi Abraham Joshua Heschel, who said when he accompanied Rev. Martin Luther King Jr. during the Selma to Montgomery march, it was “as if my feet were praying.”

David Goodman, whose brother, Andrew, was killed by Klansmen in Neshoba County, Miss., in 1964, also spoke, as did Jonah Pesner, head of the Religious Action Center of Reform Judaism, and Clarence Jones, King’s political advisor. Peter Yarrow of Peter, Paul and Mary was a surprise guest, singing the “holy song,” “Blowing in the Wind.”

“They do a lot,” said Amy Milligan. “It’s amazing for such a small congregation.”

While working at Elizabethtown College in Pennsylvania, she did a book about the small Orthodox community in Lancaster.

Two years ago, a former colleague did a civil rights tour to Selma, and Milligan challenged her to find the few Jews of Selma.

Her friend met Leet and Hannah Berger, then texted her from inside Mishkan Israel — “You need to come visit… you need to see this Temple.” Milligan said she wasn’t interested in writing a civil rights book, and was told Selma is much more than that.

She visited and was immediately captivated by the small congregation with the large historic building. “There was an immediate click… Selma has a little magic in it.”

She is working on a book about the Jewish history of Selma and advising with the preservation effort.

Milligan “has kicked me into getting this restoration project moving forward,” Leet said. “I just never knew where to start.” The congregation now has a social media presence, the online fundraiser and plans to go after grants and large donations.

They are working with an architectural firm to do renderings of the sanctuary and see what it will take to do a restoration. Leet said potential donors want to see concrete information, and “we don’t have that in presentation form yet.”

After the roof and electrical, some additional work would be needed to update the building. The sanctuary is not air conditioned, leading to very warm conditions in the summer. The sole one-person bathroom isn’t up to accessibility standards.

The room behind the sanctuary is air conditioned, and is where receptions take place. There is also a collection of Selma’s Jewish history for visitors to peruse.

With Selma’s events around Alabama’s bicentennial, more pieces for the project started falling into place.

In April, Milligan visited to assist on a shoot with Blue Magnolia Films, which was producing a short film about Mishkan Israel. In late May, “Selma200: Stories of Revitalization” debuted, with a series of short films, including the one about Mishkan Israel. A downtown walking tour of public art regarding each of the film subjects was also unveiled.

Blue Magnolia was originally founded in 2014 “to celebrate “bright spots” and small town solutions across the state of Mississippi.” Co-founder Alison Fast is a Peabody Award-winning filmmaker.

In 2017, Blue Magnolia did a similar series of films for Greenville, Miss., including “Shalom Y’all: A Photo Story by Benjy Nelken” about Hebrew Union Congregation, for the Mississippi Bicentennial’s “Celebrating One Greenville.”

Most Jewish visitors to Selma are there to see the city’s civil rights legacy, often inspired by the iconic photo of Heschel and King at the Edmund Pettus Bridge. Sometimes Jewish groups go through Selma, taking their bus to the bridge, and when they pass Mishkan Israel, they say “my goodness, is that a synagogue?”

For those who come on civil rights tours, “If they even know there are Jewish people in Selma, they’re going to assume the worst,” Leet said. But the reality was a “wonderful” relationship between the Christian and Jewish communities.

And yet, during the civil rights battles there were tensions as the Jewish community, which was generally in favor of voting rights, tried to stay out of the conflict as a small minority in Selma. Jewish activists would come to town, but Selma’s Jews were actually living there and had to deal with any repercussions.

On occasion, groups plan a visit that is much more involved than the usual couple of hours. Over Martin Luther King Weekend in January 2017, Ohev Shalom, the National Synagogue in Washington, spent Shabbat in Selma.

That was a logistical challenge, as the Orthodox congregation came to the Reform congregation, bringing their own mechitza, kosher catering and prayerbooks. The nearest hotel was over a mile away, with the group walking back and forth over Shabbat.

Nevertheless, Rabbi Shmuel Herzfeld said the weekend was “one of the most powerful, intense and emotional experiences of my life,” recommended the experience to other congregations and said “every Jewish Day School in the country should take their classes to Selma, Montgomery, Birmingham.”

Leet is fine with that concept, but noted that with only four members serving as volunteers, there is a limit to what they can currently accomplish logistically. In his 60s, he is the youngest member of Mishkan Israel, and gave about 17 presentations to visiting groups last year.

Just before Thanksgiving last year, the Jewish Federation of Greater New Orleans brought a group of African-American and Jewish students on a day trip to Selma and Birmingham, and this year Birmingham’s N.E. Miles Jewish Day School hosted four Jewish Day Schools from around the country, with students from the five schools touring sites in Birmingham, Montgomery and Selma.

But Leet said civil rights is just a small part of the rich Jewish legacy in Selma. The Jewish community began in the 1830s and grew swiftly, with three waves of immigration in the 19th century.

The Harmony Club, a Jewish social club, was founded in 1869. The club’s 1907 building, just steps from the Edmund Pettus Bridge, has been restored by two non-Jewish men into a residence and event space, with the cornerstone listing several Jewish families still visible, and an Israeli flag flying in front of the building. They have recently made part of the building into an AirBnB, Milligan noted.

Mishkan Israel was organized in 1870, meeting in private homes, then at the Episcopal Church before buying the church’s school building and parsonage. On that site, they decided to build the current building in 1899.

Three of Selma’s early mayors were Jewish — Simon Maas, who served from 1887 to 1889; Marcus Meyer, from 1895 to 1899; and Louis Benish, from 1915 to 1920. It was said that during that era, on the High Holy Days one could roll a bowling ball down Broad Street and not hit anyone, because so many of the stores were Jewish-owned and all were closed.

Mishkan Israel’s membership peaked at 104 around 1940, but the next generation began to depart for larger communities after college.

The congregation had a much-needed boost when Steve Grossman moved to the area. Raised in a traditional community, he led services at Mishkan Israel, while at other times he would go to Birmingham to attend services at the Orthodox Knesseth Israel. But in April 2017, he was struck by a car and killed. With the death of Ed Ember in January, Mishkan Israel is down to four members.

Leet said they still have occasional services, usually drawing 30 to 40 people. Naturally, that mostly comes from non-Jewish friends, many of whom remember accompanying their Jewish classmates to Shabbat services years earlier.

He added that Selma has a long legacy of close relations between the Jewish and Christian communities. In appreciation for their assistance, Mishkan Israel presented the Methodist church with a baptismal font in 1899, which they still use today, Leet said.

Another major piece of Selma Jewish history deals with the Zemurray family. Sam Zemurray, who became a powerful banana importer in New Orleans and controlled central American countries, had been in Selma, brought there by his uncle. Leet said June and Seymour Cohn used to talk about how Zemurray used to hang bananas in the basement of their store before moving on and becoming famous.

When she met the remaining members of Mishkan Israel, Milligan said she knew she needed to be the one to tell their story. Visiting Selma for the first time, “I’d found friends and family — and good food.” She now visits every three to four months, but is in constant contact with Leet.

Many people arrive with preconceived notions of Selma and don’t give it a chance, she said. “When we connect with people we can connect easily with a place.”

Leet said he routinely watches as visitors to Mishkan Israel are astonished at the beauty of the building. “I can’t imagine this project not being successful and this not being here,” he said. Mishkan Israel can be “part of the future success of Selma… it just needs to happen.”

The GoFundMe page can be found here.