At Maccabi Pan Am Games, Fielkow brings gold back to New Orleans 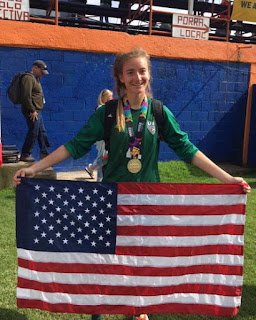 As a senior at Ben Franklin High School, Yana Fielkow is preparing for her final high school soccer season while going over options as college soccer programs recruit her.

Having an international gold medal on the resume certainly won’t hurt.

Fielkow was part of the gold-winning U.S. national Juniors Girls Soccer team at the Maccabi Pan Am Games in Mexico City, which took place July 5 to 15. The Games attracted 2,500 Jewish athletes from 19 countries, participating in 24 different sports.

For Fielkow, a highlight was “getting to know different people from all over South America” and “just talking to them.” She added, “I’ve never been around that many Jewish people in my life.”

Fielkow started playing soccer at age 6, shortly after coming to the United States after being adopted from Ukraine. She started playing as a forward, then shifted to defense. At age 10, she tried being a goalie, and has been in front of the net ever since. Being 5-foot-10 certainly helps in that endeavor.

It wasn’t necessary in terms of game action in Mexico City, however. Because the U.S. team was so dominant, “the other goalie and I really didn’t have to do much,” as the team “played most of the game on the other half” of the field.

The team plowed through the competition, going 3-0 in pool play, with a 23-to-1 scoring advantage.

In the semi-finals, the U.S. beat Brazil, 5-0, and then played a Mexican club team, Mexico Invitado, beating them, 7-2, for the gold.

“I’m totally fine with that,” she commented. But she said “everybody on the team wished it was a little more competitive.”

For the past two years, she played for the Mandeville Lakers, but this year is switching to the Louisiana Fire in New Orleans, a youth club of the Major League Soccer Chicago Fire. Last year, she was named first team all-state and all-metro. Last year, Mandeville won the Southern Regional Championships and advanced to the U.S. Soccer Nationals. She was named the top goalkeeper at the Southern Regional Championships and the Golden Gloves winner.

While this was her first Maccabi experience, her family is quite experienced with the games. Her father, Arnie Fielkow, was part of the silver medal U.S. Masters basketball team in the 1997 Maccabiah in Israel, and is currently a national vice president for Maccabi USA. Brother Steven was on the gold medal U.S. baseball team at the 2009 Maccabiah in Israel, and sister Svetlana was on the New Orleans soccer team for the JCC Maccabi Games in Detroit in early August.

Fielkow said she would love to pursue competing in the World Maccabiah in Israel in 2021. At the games in Mexico City, “it was special to represent the U.S. and win.”