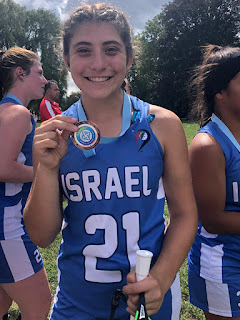 While the U-19 Women’s Lacrosse World Championships were being held in Peterborough, Ontario (see story here), there was also a World Lacrosse Festival for teams in the U-15 bracket from Aug. 7 to 9, and Birmingham’s Ilana Touger was on the bronze medal-winning Israeli team.

Inspired by a cousin who played lacrosse in college, Touger started playing in first grade. “There weren’t a whole lot of people playing, but it was really fun,” and she continued to develop her skills.

Now, she competes in the Greater Birmingham Youth Lacrosse Association and plays for Mountain Brook. She also has been participating in the HotBama summer lacrosse program since sixth grade, competing on a regional level.

She found out about the Canada competition from Ella Duvdevani, who was playing for Israel in the U-19 tournament. “She said she’d love for me to go,” and there was still space on the U-15 team. “I thought it would be a really good experience,” Touger said.

To play for Israel at the U-15 level, the requirements were looser than for the older groups. All U.S.-based players for Israel’s U-15 team had to be eligible for Israeli citizenship based on the Law of Return, namely, one Jewish parent or grandparent.

Being from a region where lacrosse isn’t well established, she was nervous at first. But that quickly changed, as “everybody was really welcoming, the coaches were super-nice.” A highlight was getting to meet players from around the world and learning other perspectives about the game.

Before the tournament, there was a three-day training camp. In the eight team field, Israel finished third, with the bronze medal, after winning four, tying one and losing one. Other teams in the tournament were from Canada, the United States, England and Wales.

Touger hopes to continue playing in college, though that is still a couple years away.

Now that she has competed for Israel, she looks forward to visiting Israel, perhaps on the Israel Lacrosse Service Trip, where high school lacrosse players travel to Israel and teach lacrosse skills to Israeli peers.