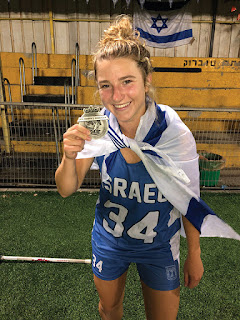 As the school year ended at Fresno State University for Birmingham’s Olivia Mannon, “little did I know I’d be coming away with a lot of great relationships and a silver medal” after representing Israel on the world stage.

The rising senior for Fresno State’s lacrosse team participated in all eight matches for Israel’s national team in the 2019 Women’s European Lacrosse Championship, held July 15 to 25 in Netanya, Israel. Israel lost to England, 10-7, in the championship game on July 25.

The team opened with an easy 13-2 win over Germany, followed by a 12-6 victory over Scotland. England defeated Israel, 12-3, but Israel rebounded with a win over Ireland, 12-10, before being tripped up by Wales in a 12-8 loss.

Israel defeated the Netherlands, 15-5, then avenged their Wales loss with an 8-5 victory, setting Israel up for the title game. In all, there were 16 teams in the tournament. Before the tournament, Israel ranked sixth in the world, fourth in Europe.

Before moving to Birmingham, Mannon lived in Chevy Chase, Md., a “hotbed” of lacrosse, so she picked up the sport in second grade and started competing in fourth grade. When she moved to Birmingham as a fifth grader, she joined the Greater Birmingham Youth Lacrosse Association and was told she could play with the middle schoolers.

While attending Altamont, she played soccer for Altamont but went to Mountain Brook to play high school lacrosse, as the sport is still in its early stages in Alabama. In 2015, she signed with Fresno State.

Not certain what she was going to do this summer, she and one of her college teammates went on a Birthright Israel trip that was a partnership with Israel Lacrosse. She enjoyed “doing Birthright and meeting all these other Jewish American kids, and we all have lacrosse in common.”

As part of the trip, there were tryouts as Israel’s national team could have three non-citizens compete in the European Championships. “I ended up making it,” she said, which completely shifted her summer schedule. “It was an amazing opportunity.” Those on the Birthright trip who did not make the national team could stay and play on the developmental team in the Festival bracket.

Two days after the Birthright trip ended, she went to Netanya to start practicing until the tournament began. “I didn’t know what to expect in Israel,” she said. “It ended up such a great experience.”

After just four practices for the Israelis, the opening ceremony was at Robert Kraft Stadium in Jerusalem. For the actual tournament, there was one field, so scheduling was often interesting. Their game against the Netherlands started at 10:20 p.m.

The following day’s semifinal against Wales was broadcast, the first time Israel Lacrosse’s women’s team was on television. The next day, “we were getting to watch the game from the night before.”

The men’s team showed up to support them, “in full Israel fan gear.”

She was “on such a high after the semi-final.” Though they lost the championship by three goals, “it was definitely a close game” and a tremendous achievement for the Israeli team. “This is the first time in the women’s program history to medal, so it was huge.”

She said the team was “remarkable… probably the most unselfish team.” That was an advantage, as “we really worked well with each other.”

A decade ago, she had been to Israel on a family trip, where she had a Bat Mitzvah at the Robinson’s Arch egalitarian section of the Western Wall. “Going back as a 21-year-old, and really getting to see the country, talk to people, understand the political climate… I was able to appreciate it a lot more,” she said.

Birthright was “an eye-opening experience. Playing lacrosse there was icing on the cake.”

She has one more year of eligibility at Fresno State, and “tryouts for the World Cup are next summer.”