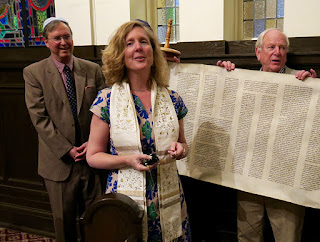 Less than two weeks before the High Holy Days, the Birmingham Jewish community was stunned by the sudden resignation of Cantor Jessica Roskin, who has been at Temple Emanu-El for 20 years.

In an email from the board that went out “with a heavy heart” in the late evening of Sept. 18, a short letter from Roskin was forwarded, stating she has “decided it is best that I resign” for personal reasons.

She stated that in the past year, she had been under “an enormous amount of stress for various reasons,” including the decline of her parents’ health, and that during that time she made “inappropriate” choices in her personal life “that I regret.”

With the recent arrival of Rabbi Adam Wright, Emanu-El “has a new rabbi and a new beginning,” and she takes comfort in that, she said.

Roskin said she “will always cherish the warm memories and many deep friendships made at this wonderful congregation. I wish for you only blessings in this new year, and in all the years to come.”

After Rabbi Jonathan Miller retired at Emanu-El in the summer of 2017, the congregation had Rabbi Douglas Kohn on an interim basis for one year. The congregation was scheduled to have a visiting student rabbi twice a month in 2018-19, but those plans fell through at the last minute, so Roskin was the sole clergy member for the year, coordinating volunteers to assist during the “Year of Engagement.”

In May, Roskin received a doctorate of music, honoris causa, from Hebrew Union College-Jewish Institute of Religion, recognizing 25 years of service as a cantor. Emanu-El held a recognition of her 20 years at the congregation in June, and for her work during the transition year.

Congregants and people from the greater Birmingham community flocked to social media to express love and admiration for Roskin.

Emanu-El President Al Cohn said “everyone is sad and broken-hearted.” He characterized the announcement as “a series of events that led to a conversation” over the past month “that led to a resignation.”

A congregational meeting has been called for Sept. 23 at 6 p.m. “to address concerns.”

The board email noted that Roskin “will not be participating in upcoming Temple activities or life-cycle events,” but “Rabbi Wright and the entire Temple leadership team remain prepared to ensure that the spiritual and educational needs of our Temple families remain prioritized to the same extent we are all accustomed.”

Cohn said this isn’t how anyone envisioned the end of Roskin’s time at Emanu-El, nor the beginning of Wright’s. Emanu-El will “move forward on whatever we can do to re-create his team.” More information will be given “as details and contingency plans materialize.”

As for the upcoming holidays, Cohn said Emanu-El is fortunate that Bernard Gutcheon, husband of the congregation’s education director, Lynda Gutcheon, is a cantor. The cantor emeritus of The Temple in Nashville, Gutcheon “is going to step in and do his best to fill that role,” Cohn said.

“It won’t be (Roskin), but it will be an opportunity to still have an experienced, wonderful cantor lead the service” with Rabbi Wright.