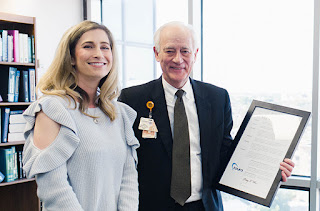 The Judah Touro Society Award is the hospital’s highest honor and is voted on by previous recipients. It is given annually to an individual who has made outstanding contributions to the welfare of Touro Infirmary.

Glynn has been practicing for 42 years as a physical medicine and rehabilitation specialist. He graduated from LSU School of Medicine-New Orleans in 1974.

Glynn joined the Touro medical staff in 1981 and was instrumental in launching Touro’s Rehabilitation Center, which currently has six Commission on Accreditation of Rehabilitation Facilities accreditations, the most of any hospital in Louisiana. He served as the founder and medical director of multiple rehabilitation programs at Touro Infirmary, and is a founding member of the Judah Touro Society.

There is also a Gala After-Party starting at 9 p.m. at Press Street Station. Admission to the after-party is included in Gala tickets, or for those not attending the Gala, admission is $50, or $75 for a couple.