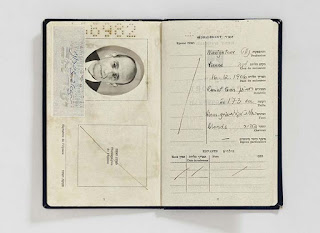 Falsified Israeli passport in the name of Zeev Zichroni, prepared for secretly transporting Adolf Eichmann to Israel. The photo was taken at the safe house in 1960 (from Mossad archive)

The National World War II Museum in New Orleans is inaugurating its Hall of Democracy with “Operation Finale: The Capture and Trial of Adolf Eichmann.”

The exhibit uncovers the secret history of one of the 20th century’s most sensational events — the capture and trial of Nazi war criminal Adolf Eichmann. As head of the Nazis’ homicidal “Jewish Department,” Eichmann zealously managed the transport of millions of innocent people to death camps and vanished after World War II.

Operation Finale — the code name of Israel’s effort to find Eichmann — reveals how agents of Mossad, Israel’s national intelligence agency, located him in hiding in South America years after the war, then abducted and smuggled him out of the country to stand trial in Israel, where he was convicted and sentenced to death by hanging, remaining the only time Israel has done a judicial execution. The exhibition features recently declassified materials, including 1960s-era artifacts, photographs, film, audio, contemporary design elements and interactive displays.

Visitors will be transported to the courtroom of Eichmann’s trial in Jerusalem through an immersive video, complete with a replica of the iconic glass booth in which the accused sat as his courtroom drama was broadcast around the globe as a principal perpetrator of the Final Solution. Eichmann’s conviction and execution began a new chapter for Holocaust survivors to speak out about the atrocities they endured. The exhibition concludes with the legacy of the trial and how the mantra “Never Again” must ring out around the world.

“Operation Finale” is a coproduction of The Mossad: Israeli Secret Intelligence Service; Beit Hatfutsot, The Museum of the Jewish People, Tel Aviv, Israel; and the Maltz Museum of Jewish Heritage in Cleveland, Ohio.

Sponsorship for Operation Finale, which will be on view from Oct. 17 to Jan. 5, 2020, is provided by Perry and Marty Granoff.

Several ancillary programs will be announced during the exhibit’s run.

An opening reception is scheduled for Oct. 17, with a 5 p.m. reception and 6 p.m. program at the U.S. Freedom Pavilion.

Presentations will be given by the exhibition’s chief curator, Orit Shaham Gover, from the Museum of the Jewish People at Beit Hatfutsot, and former Mossad agent and curator of the exhibition, Avner Avraham. “Operation Finale” marks the debut of the Museum’s new special exhibition space, located on the first level of the Hall of Democracy pavilion and will be open for viewing throughout the evening.