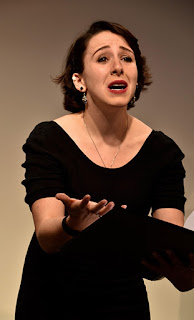 The Santa Monica-based Jewish Women’s Theatre will launch a Southern tour in November, coordinated by the Goldring/Woldenberg Institute of Southern Jewish Life in Jackson.

During the week-long tour of seven communities, the group will perform “The Matzo Ball Diaries” in most venues, and “The Art of Forgiveness” in Columbus, Ga., and Mobile.

“We’re so excited to bring this incredible group to our region,” says Ann Zivitz Kientz, the ISJL’s director of cultural programming. “We’ve been working for over a year to make this historic southern tour a reality, and I think audiences are going to be wowed.”

The Jewish Women’s Theatre Group is a California-based collective whose mission is to “create, produce and preserve diverse contemporary Jewish stories that empower and educate individuals, inspire community and build cultural legacy.” It started with three women around a kitchen table in 2007, and debuted in the fall of 2008, to “welcome and encourage contemporary stories by Jewish women and to adapt them theatrically, giving them life in front of a live audience.”

From the beginning, they focused on the word and text, in the tradition of salons — culture that could be hosted in homes, without sets, costumes and props as a way of presenting powerful stories.

In 2014, the group opened its theatre, The Braid, as a home base, with an art gallery, classroom space and experiential Shabbat services. The first production at The Braid, “Not That Jewish,” went on to open off-Broadway in 2016.

“We are thrilled and excited to embark on this Southern Tour,” said Ronda Spinak, JWT’s artistic director, who worked on creating the tour for several years and who saw it transform from a dream into a reality. Spinak will accompany cast and crew members, board members and JWT patrons on the nine-day tour. “We have an amazing itinerary that will allow us to meet with members of Southern Jewish communities, tour important Jewish historical and cultural sites, and put on nightly performances.”

“The Matzo Ball Diaries” shares the secret stories of food and home, with comic and poignant stories about the power of food to nourish, heal or move people to action. From learning the secret to the best brisket to personal stories of eating disorders to the fascinating history of how the International House of Pancakes was started, the show explores myriad aspects of food, culture, and community — with plenty of humor throughout.

“The Art of Forgiveness” is a compilation of stories, plays, poems and performance art that asks what does it mean to forgive, and why is it so darn hard to do it? A mother and daughter finally resolve years of quiet mistrust. An American academic on a Fulbright in Germany must face a German national who has unexpected feelings about the war. A woman accidentally kills a man and must find a way to forgiveness.

The tour throughout the South is underwritten in part by The Rosalinde and Arthur Gilbert Foundation of Los Angeles as a way to bring innovative Jewish culture to both small and large Jewish communities.

“This is exactly the sort of programming that reminds us why we do what we do,” said Kientz. “Being able to bring world-class entertainment to our communities, regardless of their size, and ensuring it’s affordable and accessible to all – that’s something we’re proud to do, and this tour is going to be an incredible example of the impact shared cultural experiences can have.”

On Nov. 12, they will perform at Temple Beth El in Pensacola at 7 p.m., co-sponsored by the Pensacola Jewish Federation and the B’nai Israel Kosher Kitchen. Tickets are $10 at the door.

On Nov. 15 at Beth Israel in Jackson, there will be a brief service at 6 p.m., followed by dinner and the show.

The tour concludes at the Memphis Jewish Community Center on Nov. 16 at 8 p.m., then the group will return to Knoxville for a Nov. 17 appearance at Heska Amuna.

Ticket information is available at the different venues.