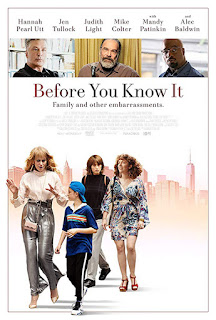 After 21 years of developing into one of the nation’s must-see film festivals, the Sidewalk Film Festival has a new home, and one of the first major events will be the inaugural Birmingham Jewish Film Festival.

Sidewalk announced the “mini-festival” will run from Nov. 21 to 24.

In late September, the Sidewalk Cinema opened in the Pizitz building in downtown Birmingham. The center has two 95-seat screening rooms, two lounges, a concession stand and bar, and an educational center. During the year, it will show independent films and retrospectives daily, and the cinema was used for the first time during this August’s Sidewalk festival.

The festival, presented by the Birmingham Jewish Foundation, is “a cinematic exploration of Jewish culture, history, art, and life in Israel.” In addition to four days of film, the festival includes an opening night reception, panels, workshops, networking events, and a closing night party featuring a tasting of Jewish cuisine.

Janet Aarons, assistant director of the Foundation, said “we know that several communities in our region have successful festivals, and we were thrilled when Sidewalk approached us.”

Chloe Cook, executive director of Sidewalk, said they worked with members of the Birmingham Jewish community to select the films.

“The Jewish Film Festival will not only screen Jewish themed films chosen by members of the local Jewish community in conjunction with the Sidewalk staff, but will also incorporate Jewish-themed events surrounding the screenings,” Cook said.

Though the festival will run through Shabbat, Cook said the films screened on Shabbat will be exclusively encores, “so that no one has to miss a title if they keep the Sabbath.”

Filmmaker Michele Forman, who grew up in Birmingham’s Jewish community and is now director of the media studies program at the University of Alabama at Birmingham, said she is excited to see the festival debut. “I really can’t believe the diversity of Jewish experience from around the world they are bringing to Birmingham,” she said.

Aarons said the festival is a great opportunity for the community to see current movies that aren’t typically playing at the multiplex. “Also, it will provide the chance for young members of the community to experience some classics and for older members to revisit some of the movies they’ve loved over the years,” she said.
Aarons also noted that the Pizitz building, where the Sidewalk theater complex is housed, is part of Birmingham’s Jewish history.

Though many other communities, including Baton Rouge, Mobile, Nashville and Jackson have longstanding Jewish film festivals, aside from a couple of smaller events from 2011 to 2013, this will be Birmingham’s first Jewish Film Festival.

Many festivals in the region began through Jewish Cinema South, initially coordinated by the Goldring/Woldenberg Institute of Southern Jewish Life before becoming independent.

A preliminary lineup for the Birmingham festival was announced on Oct. 31.

The opening reception starts at 5 p.m. on Nov. 21 at the Sidewalk Cinema Lobby Bar. At 7 p.m. “Before You Know It” will be screened in both theaters. Released in August, the film is about a dysfunctional family that runs a small community theatre in New York City. After the father, played by Mandy Patinkin, dies, the two daughters find out that their real mother is a soap opera actress — and the business and family home had been left to her.

On Nov. 22, the wide range of offerings begins at noon in Theater A, with “The Rabbi Goes West,” a documentary about religious diversity focusing on a Chabad rabbi who moved from Crown Heights to open the first Chabad center in Montana. The filmmaker is scheduled to attend. At 2 p.m., “Chasing Portraits” tells of filmmaker Elizabeth Rynecki’s quest to find — but not reclaim — paintings her great-grandfather did of Jewish life in Poland before he was murdered in the Holocaust.

At 4 p.m., “Safe Spaces,” which was featured at Sidewalk in August, has Justin Long playing an adjunct creative writing professor who is forced to grapple with the backlash to a class discussion that he saw as innocent, but others felt crossed the line.

Filmmaker Daniel Schechter said Long’s character is partially inspired by himself and his experience as a teacher. Fran Drescher plays Long’s mother, and the character is based on Schechter’s mother.

The final film of the day in Theatre A is “Seder-Masochism” at 7 p.m., an animated feature that loosely follows the Passover Seder, with the events being told by Moses, Aaron, the Angel of Death, Jesus and director Nina Paley’s father. There’s also a battle with humankind’s original deity, the Great Mother, in a battle against patriarchy.

In Theater B, “Longing” screens at 12:30 p.m., an Israeli comedy-drama about a middle-aged bachelor who finds out his former girlfriend gave birth to his son 20 years earlier.

At 3 p.m., the documentary “Fiddler: A Miracle of Miracles” is the inside story on how a risky Broadway show with mixed reviews became a cultural icon, with a celebrated film adaptation and becoming the first Broadway musical to exceed 3,000 performances. The “Fiddler” screening is sponsored by Temple Beth-El, and Rabbi Stephen and Bethany Slater will lead a brief talkback after the screening.

On Nov. 23, “Latter Day Jew” screens at noon, following writer-comedian H. Alan Scott as he finds his spiritual path while preparing for his Bar Mitzvah, trying to figure out how to be the best Jew he can be. Raised Mormon in the midwest, Scott came out as gay, was diagnosed with cancer and converted to Judaism.

After a 7 p.m. encore screening of “Seder-Masochism” in Theater B, “The Dancing Dogs of Dombrova” will be at 8:45 p.m. The Canadian film depicts two estranged siblings being asked by their dying grandmother to go to Poland and exhume the remains of her long-dead family dog so they can be buried together. Despite barely speaking to each other and knowing no Polish, they have to journey together to a remote village to try and accomplish their grandmother’s wish.

On Nov. 24 at 10:45 a.m., “The Rabbi’s Cat” will be in Theater A. Based on a French graphis novel series, the animated film is set in the Jewish community of Algeria in the 1920s. After eating a parrot, the rabbi’s cat is able to speak, and the now sharp-tongued cat with less-than-wholesome designs on the rabbi’s daughter insists that he be trained for a bar mitzvah. They soon encounter and join a Russian Jewish stowaway who has come to Africa in search of a hidden city of black Jews deep in the continent.

Encore screenings of “Latter Day Jew” at 1 p.m. and “Chasing Portraits” at 3 p.m. round out the lineup in Theater A.

In Theater B on Nov. 24, “The Dancing Dogs of Dombrova” will be at 11:30 a.m., followed by the 1969 Gene Kelly film, “Hello, Dolly!” at 1:45 p.m., the story of matchmaker Dolly Levi, played by Barbra Streisand, and her attempt to find a match for the miserly Horace Vandergelder, played by Walter Matthau.

The closing night reception will be in the Lobby Bar from 5 to 6:30 p.m., followed by the final selection of the festival, “Standing Up, Falling Down,” a comedy about a failed stand-up comedian played by Ben Schwartz who has to leave Southern California and move back to his family in Long Island. There, he strikes up a friendship with an alcoholic dermatologist, played by Billy Crystal, as they confront their personal disappointments and regrets. The film screens at 7 p.m.

Tickets and passes go on sale Nov. 1. A $24 Pick-3 Pass provides entry to any three films. A $100 VIP pass includes entry to the entire lineup, along with six drink tickets for Yellow Tail wine and Cahaba Brewing Company beers, as the Sidewalk Concession Stand and Full Bar will be open throughout the festival. Single tickets will also be available for $10.75.