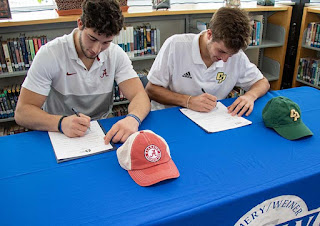 Peter Berry of Houston, regarded as the No. 1 wheelchair basketball prospect in the nation, officially signed a full scholarship to play college ball at the University of Alabama.

The ceremony was held on Nov. 13 at the Emery Weiner School, a Jewish school for grades 6 to 12, where Berry is a senior. At the ceremony, his cousin Noah signed with Cal Poly’s tennis team.

In 2011, when Berry was 9, his family was involved in a distracted driving crash that killed his parents, Robin and Joshua Berry. He and his younger brother, Aaron, were paralyzed from the waist down, and their sister, Willa, was seriously injured.

After the wreck, Simone and Matthew Berry, their aunt and uncle, took them in and raised them.

During their therapy at TIRR in Houston, their aunt brought them to a TIRR Memorial Hermann Junior Hotwheels wheelchair basketball game, where they met Abraham Hausman-Weiss, a team member who later signed with Alabama. Having played basketball before the wreck, Peter and Aaron joined the Hotwheels the next week.

Born in Los Angeles, Hausman-Weiss was 19 months old when the family moved to Birmingham. He attended Birmingham’s N.E. Miles Jewish Day School before moving to Houston in 2011 when his father, Rabbi Scott Hausman-Weiss, became senior rabbi of Congregation Emanu-El in Houston.

In August 2011, Abraham Hausman-Weiss, who was born with spina bifida, had spoken at Beth Yeshurun Day School, where the Berrys attended at the time, giving advice to the students on how to treat the Berrys when they would return to the school a few weeks later after spending three months at Shriners Hospital for Children in Chicago.

Most recently, he was named tournament MVP at the national Woodbury Adaptive Basketball Tournament in Minneapolis, which concluded on Nov. 4. In 2017, he also played on Team USA’s wheelchair basketball team at the 2017 World Maccabiah games in Israel.

He is also a starting member of the TIRR wheelchair softball team, which won the 2018 World Series.

Alabama’s men’s wheelchair basketball team won back-to-back national championships in March, while the women’s team won its sixth national title. In January 2018, Alabama opened a $10 million facility custom designed for and dedicated to the Adapted Athletics program, the first of its kind on a college campus in the United States.

At the signing ceremony, Berry told KHOU-TV that “I couldn’t have done it without the people I was surrounded by — my supporting cast — my coach Trice (at TIRR) taught me to stick my chest out and keep my head up, and that’s really the only option I had.”

Earlier this year, Berry attended a wheelchair basketball camp at Alabama, telling WBRC-TV that “All of these kids were punched straight in the face in the beginning of life, or at some point in their life. And so with hard work and dedication and perseverance and just proving to yourself and to others that you’re capable of really achieving anything.”