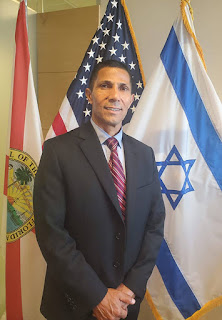 The Miami Consulate serves an area that includes Florida, Alabama and Mississippi, as well as Puerto Rico. Ishmael Khaldi succeeds Consul General Lior Haiat, who was named spokesman of Israel’s Ministry of Foreign Affairs before his expected time in Miami was completed.

Khaldi was born and raised in Khawalid, a small Bedouin community in northern Israel near Haifa. He was one of 11 siblings, and grew up without electricity or running water in his home, living in a tent until age 8, as his family raised sheep and goats.

Encouraged by his parents to attend college, he started working at a nearby kibbutz, then decided to join the Israel Defense Forces. He served in the IDF and the Israeli police, also earning a bachelor’s degree in political science from the University of Haifa and a master’s degree in political science and international relations from Tel Aviv University.

He started a project called “Hike and Learn with Bedouins in the Galilee,” bringing young Jews to the area to learn about Bedouin culture and the transformation of Khawalid to a modern society. He says the encounter with many of the thousands of participants in the project inspired him to become a diplomat.

In 2004, he started working for the Foreign Ministry. He first served in the Arabic Media Department as the spokesperson to the Arabic media during the disengagement from Gaza, and then was appointed Deputy Consul General in San Francisco between 2006 and 2009.

From 2009 until 2011, Khaldi served as the policy adviser to the Minister of Foreign Affairs, Avigdor Lieberman. Most recently, Lieberman was Minister of Defense until resigning in November 2018 to form the Yisrael Beitenu party, which some have seen as the spoiler in the last two Israeli elections, keeping both Likud and the Blue and White parties from being able to form a ruling coalition.

In 2012 Khaldi assumed the role as Counselor for Civil Society Affairs at the Embassy of Israel in London, serving there until November 2015.

While posted at Kathmandu as Israel’s ambassador to Nepal, earlier this year he teamed with the local Chabad rabbi to make miniature oxygen tanks available for rental, to protect them from altitude sickness in case of emergency. Rabbi Hezkl Lifshitz explained that many hikers don’t carry the tanks because of their weight and expense, so this project made oxygen easier to transport and more affordable. An Israeli hiker died in a jeep accident on a Himalaya ridge two years ago.

As a Muslim diplomat representing Israel, Khaldi has been a particular target of anti-Israel groups when speaking on college campuses. On Nov. 14, his appearance at Middlebury College was met with a protest by about 25 students. His talk was about facilitating conversations between Bedouins and Jews in Israel, and what it means to be a minority in Israel.

Nepal is a popular tourism destination for Israelis, and after the 2015 earthquake, Israel sent a delegation of 250 medical personnel and rescue workers.

Among other incidents, during his 2011 talk at Kent State University, former Associate Professor of History Julio Pino interrupted his lecture by shouting “Death to Israel.”

Back in Israel, he has been fighting bureaucracy for years to get the access road to Khawalid, paved, providing reliable access to jobs and healthcare in nearby towns. He also has fought to maintain the Bedouin character of 13 such small communities in northern Israel.

Khaldi is the author of “A Shepherd’s Journey: The Story of Israel’s First Bedouin Diplomat,” detailing his early service representing Israel.

From Miami, he will oversee relations with what his predecessor called “probably the most pro-Israel area of the U.S.” He does not know how long he will be in Miami, as without a government in place, senior diplomatic appointments can’t be made.