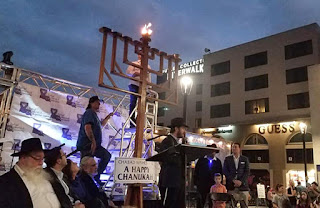 As a prime example of shining light in the face of darkness, when former Ku Klux Klan leader David Duke was running for statewide office in 1989, Chabad in New Orleans approached the Riverwalk to host a public Chanukah celebration and menorah lighting to combat hate.

“The Riverwalk embraced that opportunity and a partnership was born,” said Rabbi Mendel Rivkin. The Jewish Community Relations Committee of the Jewish Federation of Greater New Orleans voted to approve the event, and over the past 30 years, the event has continued to grow into one of the major events on New Orleans’ annual Jewish calendar.

By the third year, 1000 people attended. Over the years, attendance has ranged between 300 to 700, with over 500 attending last year. Community and political leaders often attend, including several mayors, members of Congress, state legislators and members of the city council. For many of the celebrations, either the mayor or the city council issued a proclamation in honor of the event.

The event offers music, food, Chanukah materials, several forms of children’s and general entertainment. Central to the event is the lighting of the 11-foot menorah constructed by the late Isak Borenstein, one of the community’s Holocaust survivors.

There have choirs and plays featuring children’s groups. Last year’s event featured the Power of Light ceremony with presentations in six languages.

While the Riverwalk was undergoing major renovations in 2012 and 2013, the event moved to Lakeside. Since 2014 it has been back at the Riverwalk, overlooking the Mississippi River.

The event was coordinated by David Kaufmann until his illness and passing in 2017. Since then, Rabbi Mendel and Malkie Rivkin direct the program.

In recent years, the Krewe du Jieux has held a Chanukah parade following the Riverwalk event, dancing through the French Quarter starting around 6:30 p.m., accompanied by the Panorama Jazz Band. The parade concludes around 8 p.m. at Café du Monde, where menorahs will be lit and kosher beignets and chocolate gelt will be consumed.

While the Krewe’s Mardi Gras parade in February is adult-themed, the Chanukah parade is family friendly. The parade is free, but cash is encouraged for tipping the band and buying refreshments along the way.

In addition to attracting members of the general community, Jewish tourists have also been captivated by the Riverwalk event. Rivkin related two especially memorable examples.

“Imagine her surprise when she stumbled upon Chanukah @ Riverwalk,” Rivkin said. “She was thrilled beyond belief! She told her daughter that Chabad had this party by the river and there was a dancing dreidel and latkes and music. She said it literally saved her Chanukah.”

The other story was 18 years ago, when an elderly Jewish guest was staying at the Hilton Riverside hotel. Upon leaving the hotel, the sound of music caught his ear. He followed the music into the Spanish Plaza at the Riverwalk. As he neared the plaza he realized that it was Jewish music, and was stunned to see hundreds of people surrounding a large menorah, awaiting the lighting. “Overwhelmed with emotion, he burst into tears,” Rivkin said.

As he calmed down he sought out the organizer of the event and explained the reason for his emotional reaction. “I am,” he exclaimed, “a survivor of the Holocaust. I can never forget how we were hunted as Jews in Nazi Europe. Seeing Jews, my people, publicly celebrating our holiday in a display of Jewish pride, has moved me deeply. Hearing Jewish music blasting in the streets has my heart quickening in joyous disbelief. This has been a real healing experience and I cannot thank you enough for hosting this event.”