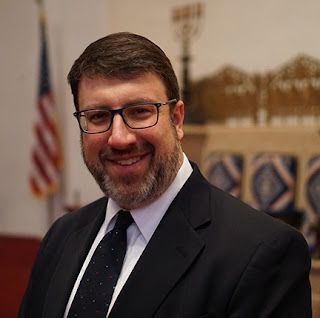 Temple Sinai of New Orleans will begin its 150th anniversary celebration with the installation of Rabbi Daniel Sherman the weekend of Jan. 24.

Sherman and his family came to Temple Sinai last July. After being ordained in 1999 at Hebrew Union College-Jewish Institute of Religion in Cincinnati, he had served as rabbi of Temple Dor Dorim in Weston, Fla., and Tree of Life Congregation in Columbia, S.C.; and assistant and associate rabbi of Temple Shalom of Naples, Fla.

A native of Tulsa, Sherman will be installed by his father, Rabbi Charles Sherman, rabbi emeritus of Temple Israel in Tulsa, which he served from 1976 to 2013.

The weekend will begin with a Shabbat evening service and ceremony of installation on Jan. 24 at 7 p.m. A festive oneg dessert reception will follow the service, and the community is invited. A congregational dinner will be at 5:45 p.m., and reservations are required.

Gates of Prayer in Metairie and Touro Synagogue in New Orleans will not hold services that evening, so members can attend the installation. When Rabbi Katie Bauman was installed at Touro in November, Temple Sinai cancelled their service for that evening.

On Jan. 25, there will be Torah study at 9 a.m., followed by the Shabbat morning service at 10:15 a.m., and a luncheon following. Luncheon reservations can be made through the Temple Sinai website.

While Temple Sinai is the youngest of the community’s three Reform congregations, it was the first to become Reform, and thus the only one to be Reform during its entire history. Initially, Gates of Mercy, which was founded in 1828, Dispersed of Judah and Gates of Prayer were Orthodox, though in 1851, Gates of Mercy had an organ and choir at its building dedication, despite continuing with traditional Orthodox services.

Rabbi James Gutheim liberalized Gates of Mercy in the 1860s, but moved to New York in 1868. In July 1870, a group of 37 met at the office of S.A. Seeskind, determined to start a Reform congregation in New Orleans. The new Temple Sinai had 109 founding members, and quickly built an ornate building near Tivoli Circle and attracted Gutheim back to the community.

Sinai’s anniversary celebration will continue with a “Putting on the Ritz” Roaring Twenties gala, as a nod to their current building, which was dedicated in 1928.

The gala will start at 7:30 p.m. on March 7 and feature 1920s themed music by Meryl Zimmerman, a seated dinner and “luxurious and extensive” auction.

A patron party will be held at 6:30 p.m. at the home of Joan and Julian Feibelman, Jr. Feibelman is the son of Rabbi Julian Feibelman, who served the congregation from 1936 to 1967. Cantor Joel Colman and Marcus St. Julien will present show tunes at the party.

A commemorative video and keepsake Celebration Book both featuring stories about Temple Sinai’s past, present and future will be presented.

The entire community is invited to participate in the gala. Gala tickets start at $125, while patron levels start at $300. Sponsorship packages start at $1,000, and ad space can be purchased in the celebration book.