Dreams of Hope documentary to air on public television nationwide 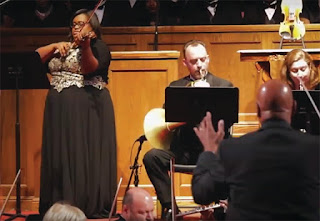 A convergence of the Holocaust and the American civil rights movement will be chronicled with the debut of “Dreams of Hope,” a documentary about an historic concert at Birmingham’s Sixteenth Street Baptist Church, available to public television stations nationwide in February, for Black History Month.

The film depicts the April 11, 2018 concert at the church, featuring Violins of Hope, restored violins that had belonged to victims and survivors of the Holocaust, and now serve as symbols of resilience in the face of hate, discrimination and racism. The documentary was directed by David Macon and Dr. Henry Panion, III.

The church was the site of the September 1963 Ku Klux Klan bombing that killed four African-American girls and shocked the world.

The violins are a project of Amnon Weinstein, a world-renowned violin maker in Israel, who has been restoring violins from the Holocaust since 1996. He has restored more than 60, and his intent is that they bear witness to the atrocities of the Holocaust and tell stories of hope and survival with their music.

The 2018 concert featured the premiere of Panion’s “Dreams of Hope for Solo Violin and Orchestra,” which was commissioned for the concert. Panion is a noted composer and professor in the Department of Music at the University of Alabama at Birmingham. Panion has won two Grammy Awards, two Dove Awards and many other national music awards, and was inducted into the Alabama Jazz Hall of Fame in 1995.

Weinstein was overwhelmed by the composition. “First there was John Williams’ ​‘Schindler’s List’ and now there’s Henry Panion’s ​‘Dreams of Hope,’ he said.​ “It’s a masterpiece that should be heard at Carnegie Hall and all over the world. There are just no words for the brilliant gifts of music which we received that evening.”

“The story of these violins and the Jewish people is of survival, hope, and triumph, one that so parallels the story of the Sixteenth Street Baptist Church and its people,” Panion said. “Having suffered the worst fate imaginable, the church and these violins have been beautifully restored and are now magnificent relics for all to behold.”

Alongside the Dreams of Hope Orchestra, the concert featured vocalists Valerie Smith and Lenora Goodman-Panion, dancer Kelsey Ebersold and the Miles College Choir. Violinist Caitlin Edwards returned to her hometown of Birmingham to play the Auschwitz Violin, originally built around 1850.

The documentary includes concert footage and behind-the-scenes interviews chronicling the event’s preparation and reflecting on its significance.

A public premiere will be on Feb. 6 at 7 p.m. at the Alabama Theatre in Birmingham. Following the screening of “Dreams of Hope,” a panel discussion with audience participation will be moderated by Dr. Tina Reuter, director of the UAB Institute for Human Rights.

The event at the Alabama Theatre is free, but registration is required here.

Weinstein’s parents moved to pre-state Israel from Lithuania in 1938, the only part of his family to leave Europe. After 1941, all communication from the rest of the family ceased. They later found out that all 400 family members perished at the hands of the Nazis.

The night after hearing the news, Weinstein’s father had a heart attack. He survived, but never spoke about the family’s tragedy again. But for some reason, at a time when Israelis wanted nothing to do with goods from Germany, he would purchase violins from the Holocaust rather than see musical instruments destroyed.

Weinstein went to Italy to learn old-world violin craftsmanship, and took over the family business when his father died in 1986. But the Holocaust continued to haunt him, and he turned away violins from the Holocaust.

They had an apprentice from Dresden who knew almost nothing about the Holocaust. When he saw the “rare” collection of German instruments, he begged Weinstein to visit Dresden and give a lecture about the instruments.

Each violin comes with a story. In many cases, the violin was the key to the owner surviving the Holocaust. In some cases, a German official would take the violinist under his wing so he could perform at parties.

One violinist, who was 12 years old and whose parents were murdered, became a favorite musician of a group of Nazi soldiers. They gave him a German outfit, which he wore to his performances at an officer’s club. He would channel information that he overheard to his partisan group, which fed it to the Red Army. He soon smuggled explosives in his violin case, then one night after his performance, set them to detonate after he left.

A violin in the collection that the Weinsteins show is one that they aren’t going to restore. A man in Washington had purchased that violin and planned to restore it, but when he opened it, he found a large swastika and “Heil Hitler,” and a label stating the violin had been restored in 1936.

He was going to destroy it, Weinstein said, but also couldn’t bear to demolish an instrument, so he Googled — and found Violins of Hope, and gave it to the Weinsteins.