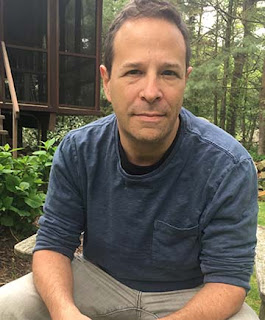 Tulane University alumnus and nationally renowned author Rich Cohen (pictured) will be one of the featured presenters at LimmudFest New Orleans 2020, which will be March 20 to 22.

Over 90 presenters from the New Orleans area, around the region and from across the nation will speak on a wide range of subjects at the weekend of learning. Presentations are done in a variety of educational styles — lectures, workshops, text-study sessions, film, meditation, discussions, exhibits and performance — accessible to everyone, no matter what their level of Jewish knowledge or commitment to Jewish life.

LimmudFest is held in New Orleans every two years. At the 2018 weekend festival, nearly 400 people participated in Big Tent Jewish learning, arts, culture and spirituality. LimmudFest is part of a global movement inspired by the idea that when Jews from diverse backgrounds come together to celebrate and learn about everything Jewish, the entire community is enriched.

“Wherever you find yourself, Limmud will take you one step further on your Jewish journey,” says Dana Keren, chair of LimmudFest 2020.

The weekend begins with registration at Gates of Prayer in Metairie, starting at 5:30 p.m. on March 20. After candlelighting at 6:45 p.m., there will be Conservative, Orthodox, Reform and Reconstructionist services under the same roof, followed by a joint Shabbat dinner at 8:15 p.m. and a Shabbat Tisch at 9:30 p.m.

After the different Shabbat morning services at Gates of Prayer on March 21, there will be a Shabbat lunch at 11:45 a.m. Sessions begin at 12:45 p.m., lasting for an hour with a 15-minute break in between, until 7 p.m. At 7:15 p.m. there will be Havdalah and a Melave Malka.

Cohen wrote the New York Times bestsellers “Tough Jews;” “Monsters;” “Sweet and Low;” “When I Stop Talking, You’ll Know I’m Dead (with Jerry Weintraub);” “The Sun & the Moon & the Rolling Stones;” “The Chicago Cubs: Story of a Curse;” and “The Last Pirate of New York: A Ghost Ship A Killer and the Birth of a Gangster Nation.” He is a co-creator of the HBO series “Vinyl.”

Cohen will present two topics during LimmudFest. “Israel Is Real” discusses his obsessive quest to understand the Jewish nation and its history, from the reinvention following the destruction of the Second Temple to modern days. Cohen will elucidate Jewish religious, cultural, and political history through quirky anecdotes.

Cohen’s second topic will be “Sam Zemurray: The Fish That Ate the Whale,” about how Samuel Zemurray arrived in America penniless in 1891, but when he died in the grandest house in New Orleans 69 years later, he was among the richest, most powerful men in the world. Cohen will relate how Zemurray worked as a fruit peddler, a banana hauler, a dockside hustler and a plantation owner. He battled and conquered the United Fruit Company, becoming a symbol of the best and worst of the United States: proof that America is the land of opportunity, but also a classic example of the corporate pirate who treats foreign nations as the backdrop for his adventures. The Banana Man was also instrumental in the emergence of the State of Israel.

“Jewish Pride Through Sports” will feature Jewish Federation of Greater New Orleans CEO Arnie Fielkow and Maccabi USA President Jeff Bukantz, along with former Maccabi athletes, talking about how the Maccabi Games have become the third largest sporting event in the world.

Josh Parshall, director of the history department of the Goldring/Woldenberg Institute of Southern Jewish Life in Jackson, will give “Southern Jewish History on One Foot.” Hattiesburg native Leon Waldoff, professor emeritus of English at the University of Illinois in Urbana-Champaign, will discuss “Jewish Civil Rights in Mississippi,” focusing on Rabbi Charles Mantinband of Hattiesburg, and his brother-in-law, Adolph Botnick, who headed the New Orleans office of the ADL during the 1960s and was targeted for assassination by Byron de la Beckwith.

Tamara Kreinin of the Packard Foundation will speak on the role Jewish women have played in fighting for reproductive rights, as she states “Louisiana is now ground zero for women’s rights in the United States” as the Supreme Court hears challenges to Roe v. Wade.

Southern Jewish Life Editor Larry Brook will present “Who Are These People? What Jews Don’t Know about Christian Zionists, and Vice Versa,” at 5:45 p.m. on March 21.

There will also be programming for children and teens.

The festival is planned entirely by volunteers, and all speakers volunteer their time. All food at LimmudFest is kosher, and meals and snacks are included in the registration fee.

Weekend passes are $100 for adults, and $75 for an adult Sunday-only pass. Children’s passes are $18, and there is a $180 Limmud Builder pass “for the mensch who wants to help LimmudFest sustain and grow,” covering the true individual cost for the weekend and helping subsidize the weekend for those who couldn’t otherwise afford it.

The entire schedule and list of speakers is available here, along with a registration link.