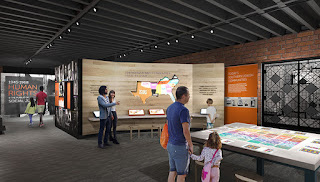 The opening of the reimagined Museum of the Southern Jewish Experience draws closer with the announcement that the New Orleans site will debut this fall.

“This will be the only museum in the country to focus exclusively on the history and culture of Jews across the South,” said Jay Tanenbaum, museum chairman.

Exhibits will explore the many ways Jews in the American South influenced and were influenced by the distinct cultural heritage of their communities, covering 13 states and more than 300 years of history — including Colonial, Civil War, World War II and the Civil Rights Movement.

Multi-media exhibits will illustrate how Jewish immigrants and succeeding generations adapted to life in the South, forming bonds of deep friendship and community with their non-Jewish neighbors. The museum will also address issues of race and anti-Semitism, and the many ways that Southern Jews navigated them at different times.

“Southern Jews have more often been a part of their communities than apart from them,” says Kenneth Hoffman, executive director. “This contrasts with America’s urban immigration centers where Jews formed more insular enclaves. The contributions they made and the acceptance they received attest to something unique in the Southern heart.”

The museum was established in the late 1980s as small Southern communities sent their religious objects and records to the Henry S. Jacobs Camp in Utica. The museum opened at the Reform movement summer camp, and some of the items, such as the ark, were used by campers during the summer.

As the museum grew, it spun off into the Jackson-based Goldring/Woldenberg Institute of Southern Jewish Life, which provides an array of services to Jewish communities in 13 Southern states.

As the camp needed space, the museum was closed in 2012 and its collection was put into storage. Tanenbaum said “In order to reimagine and grow, the museum separated from the Institute, giving it the independence to become a world-class attraction.”

After a few years of discussion, it was decided to reestablish the museum in New Orleans, because of the city’s vibrant tourism economy, long Jewish history and the historical connection to the broader Southern region.

The museum will be located in the city’s popular “Museum District,” in proximity to the National WWII Museum, the Ogden Museum of Southern Art and the Contemporary Art Center — conveniently located on the historic St. Charles Avenue streetcar line by where it turns from Howard Street onto Carondelet, and on the walking path between the museums and the Oretha Castle Haley redevelopment.

The museum’s collection of over 7,000 artifacts was transferred to New Orleans, where it was re-catalogued and put into “best practices” storage. Due to space, a small fraction of the items will be displayed at any particular time.

Multi-media exhibits will illustrate how Jewish immigrants and succeeding generations adapted to life in the South, forming bonds of deep friendship and community with their non-Jewish neighbors. The Museum will also address issues of race and anti-Semitism, and the many ways that Southern Jews navigated them at different times.

The museum is working with Gallagher and Associates, an internationally recognized museum planning and design firm, responsible for award-winning experiences at scores of international projects including the National Museum of American Jewish History, the National College Football Hall of Fame, and in New Orleans, the Sazerac House and the National World War II Museum.

The experience will start by entering through the storefront, a tribute to the common experience of Southern Jews who started as peddlers and worked their way until they could open a physical store.

An orientation film will be screened in a 60-seat theater that can also be used for lectures and other film programs.

The current plan is for the museum to be divided into three sections with an open floor plan and islands of exhibits. The first, about the 18th and 19th centuries, starts with the small Jewish communities of Colonial times and move through waves of immigration. Part of it will be devoted to Jews, race and the Civil War. “We’re not going to shy away from uncomfortable history,” Hoffman said.

Part of the first section will be about “Becoming Southern.” Hoffman said that after one was able to start making a living, “you could start being civically minded and philanthropic.” This area will mention Jewish mayors and other contributions to civic life.

The second area will be in what used to be an open-air atrium. This section will explore and describe Judaism, life cycle events, holidays and texts, using items from the museum’s collection as illustrations. There will be a Torah displayed. “It’s not a kosher Torah but it is a historic Torah from a Southern congregation,” Hoffman said.

The third section will explore the 20th century, including how Southern Jews responded to the Holocaust and Zionism, along with Jewish activism during the civil rights era and for Soviet Jewry.

The exhibit will also explore the “changing landscape” as small-town Jewish communities started to fade. There will also be explorations of Southern Jews in popular culture, including Jewish characters in works by Harper Lee, William Faulkner and Mark Twain.

Interactive stations will have more resources about each of the 13 represented states.

The final stop before the gift shop will be an interactive project about the strength of diversity in a community.

The museum unveiled the Mezuzah Society, where those donating $1,800 and up are recognized with an artistic installation made up of mezuzahs they send to the museum, and they receive a specially-designed mezuzah, hand made by glass artist Andrew Jackson Pollack in New Orleans.

The grand opening will be announced in plenty of time to allow people to come to New Orleans for it. Hoffman urges everyone to follow the museum on Facebook, sign up for the newsletter and share their stories with the museum.