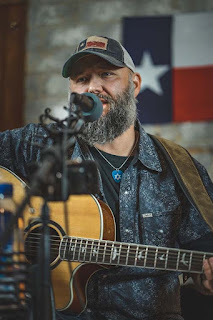 Though Joe Buchanan is one of the more active figures in Jewish music these days, performing across the country three weeks per month, he came to the field with very little background in Jewish music.

Or Judaism, for that matter.

At a synagogue early in his musical career, the Texas native said he made the egregious error of responding to the query “do you know any Debbie Friedman” compositions with “who?”

For the last several years, though, Buchanan has been a quick study since Judaism basically fell into his lap. He will spend the weekend of Feb. 28 performing in Dothan and leading a workshop, “Choosing to be Chosen,” about becoming Jewish and “some of the struggles people go through when they choose this life.”

Buchanan has recorded two Judaic albums since his conversion in 2013, “Unbroken,” which tells the story of his “coming home” to Judaism, and the Southern roots “Back from Babylon.” His compositions combine country, roots-rock and folk, while highlighting the values, teachings and history of the Jewish people.

His odyssey began when he and his wife of 13 years, April, were on vacation in Washington. “None of us had been before, and we wanted to do the White House tour.” Also on their list was the Holocaust museum, and the spy museum next door.

He said the Holocaust museum “shakes everybody who goes through there” and “I think it touched something really deep in April,” because afterward, she said she really wanted to know more about her people.

He was perplexed. “Who is that?” he asked. “Who is ‘your people’,” to which she told him that she was Jewish. “When did you get Jewish?” he responded.

“I knew her mom was Jewish, I didn’t know that made her Jewish” he reflected. Upon learning that one is born Jewish, he then asked if their son knew.

Buchanan said when he grew up in the Houston area, he spent half of his time in the Texas Hill Country. He never heard anything antisemitic and also never met anyone who identified as Jewish. He “only heard about Jewish people two weeks in history class. I had no idea it was a thriving religion… All I know is there’s something about pork.”

Buchanan was raised by his grandparents until he was 6 years old. He said his grandfather’s view of religion was “you can see God in the world, in the way things work together” and what God wants is for you to do good things. He looked around and said there “seems to be some design here, do good stuff, that makes sense.”

When his parents took over raising him, “all talk of religion left the house.” He would occasionally go to church with friends “because I would stay the night with them… I found things out, like you can’t ask questions in the middle of mass.”

He was “an inquisitive young person who is demanding some answers and not finding them anywhere.”

In church, “I kept hearing you’re damaged goods, not good enough for God as you are… you’re going to keep messing up. I did keep messing up, and I figured it was between me and God and we’d figure it out later,” he said.

He met April when he was 21 and working at a gaming store. “I lost my mind” when she walked in, he said. “I fell crazy in love.” He played her a tune and “we got married shortly thereafter. Music really works.”

He was still searching spiritually, and she would accompany him to various churches. But he noticed “she wouldn’t sing the prayers or say them, she wouldn’t do anything other than hold my hand. She never told me why.”

Then came the conversation in Washington and “I was blown away.”

When they got back to Houston, they figured “we need to get some real answers, we don’t know what we’re doing” and they showed up at Congregation Shaar Hashalom “because it was close.”

The three of them met Rabbi Stuart Federow — who has also served congregations in Greenville, Rolling Fork and Clarksdale, Miss., and Monroe, La. — and Buchanan said “They’re Jewish, I’m not, and none of us know what it means.”

Federow replied, “There’s one God, and there’s nothing wrong with you. You’re loved by God exactly as you are. You are part of the beauty and wonder of creation. We’re living the gift right now.” He added, “You do good because it brings more good to the world, not for some reward or punishment” later.

“He was talking like my grandfather,” Buchanan said. He knew immediately that he wanted to convert. When Federow told him he didn’t have to, he said “this was exactly what I’ve been looking for since I was a kid.”

Going through the process rekindled his dormant interest in music, as a way “to help me understand what I was going through.” Federow then offered him the opportunity to perform some of the tunes during services, which led to an acoustic Shabbat.

“I had no context of Jewish music,” he said. “I grew up on old country, classic rock. Those were all the influences coming into it.”

He travels the country doing performances and Shabbat experiences, often through the Jackson-based Goldring/Woldenberg Institute of Southern Jewish Life. “I want to do as much in the South as humanly possible,” he said, because he enjoys the history of the communities and hearing their stories. He said the Institute “ties communities together in ways that nobody else does as well.”

He has not been to Israel yet — but recently wrote a song, “Texas,” as a response to that question. It explores the concept of holy land and says “no matter where you are, it is the holiest place you can be.” He said the song has a “stripped-down barroom, Hank Williams Jr. feel to it. It will definitely be on the next album.”

He is currently working on music videos for each track of his latest album. “If I’m not on the road, we’re planning, shooting and casting.”

He approaches his compositions with a love for “that genuine country music sound” and tries “very hard to keep it focused on being authentic.”

Buchanan said it is important “to be able to say there are folks who are making Jewish music from Texas and doing it in a very Southern style.”

He also wants to do a lot more outreach to the faith communities in the military and in prisons, “do a musical Shabbat service in prisons and serve the community there.”

At an appearance at Fort Benning, there were 600 in attendance. “We sang, we prayed, we answered questions about Judaism.”

Those conversations are important to him, because “I was upset that I grew up and never met a Jewish person.” He wants to be a “lamplighter” because “a lot of people are looking for answers and don’t feel comfortable reaching out.”

He added, “we want to have a greater conversation with folks about what Judaism is about,” and how the Jewish community is approachable, whether or not one is seeking a new spiritual home. “I want to be part of that definition when people ask what it means to be Jewish.”

As he works to “set the table for more chairs and more conversations,” he also promotes Jewish celebration wherever he goes. He played South by Southwest, doing “the same music there that we do in shul,” and told the Friday night crowd that Shabbat was approaching. He asked them to shout back “Shabbos!” and launched into his version of “Shalom Aleichem.”