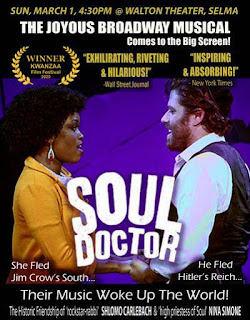 “Soul Doctor,” which won Best Feature at the New York Kwanzaa Film Festival, will be screened at the Walton Theater in Selma on March 1st at 4:30 p.m. to celebrate Black History Month and the annual Selma Bridge Crossing Jubilee.

“Soul Doctor,” the film adaptation of the Broadway musical, tells the story of the beloved yet controversial father of popular Jewish music, Rabbi Shlomo Carlebach. A modern-day troubadour, Carlebach ignited the spirit of millions around the world with his soul-stirring melodies, transformative storytelling and boundless love.

After his childhood escape from Nazi Germany, the young rabbi formed an unlikely friendship with legendary jazz singer Nina Simone, who introduced him to soul and gospel music, and a Jewish music and cultural revival was born. Fusing his roots with his new inspiration, Carlebach created a revolutionary musical sound, writing songs that continue to be the main body of Jewish musical standards. The “Jewish Gospel/Soul” experience he introduced to the synagogue worship became the most popular synagogue services across all denominations of Jewish practice.

“This story highlights the emerging paradigm shift and the need for a cross-cultural approach to racism in the aftermath of Jim Crow Segregation and the European Holocaust,” said producer Jeremy Chess.

“Soul Doctor” introduces a unique perspective to the national conversation on Jewish/African-American relations; how the African American struggle and revival helped shape the post-Holocaust Jewish experience, with Simone influencing the Jewish revival of contemporary Jewish music and synagogue worship.

To introduce “Soul Doctor,” Stephon Ferguson will deliver a specially composed speech drawing from Martin Luther King’s speeches on antisemitism and Jewish/African-American relations, along with a musical performance of songs from “Soul Doctor” by the Selma Gospel choir. Ferguson is opening the Bridge March earlier in the day by recreating King’s first Selma speech.

Following the screening of the film, there will be a community conversation on “Jewish/African-American relations” led by the writer/director of “Soul Doctor,” Daniel Wise. Southern Jewish Life editor Larry Brook will be part of the discussion.

The “Soul Doctor” musical was originally workshopped at National Yiddish Theatre Folksbiene and subsequent New York productions included an off Broadway debut at The Museum of Jewish Heritage. It had two sold-out seasons at Le Petit Theatre du Vieux Carre in New Orleans in 2009 and 2010, and subsequent runs in Miami and Fort Lauderdale before hitting Broadway in 2013. “Soul Doctor” was also the feature presentation at the “Israel at 70” Festival in Jerusalem, where the production was filmed.

The Selma event is free and open to the community.