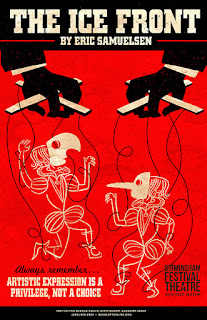 Actors with the Norwegian National Theatre, forced by the Nazi German occupation to perform a “blatantly, horrendously anti-Semitic play” stage a rebellion in “The Ice Front.”

Birmingham Festival Theatre hosts the regional premier of the play, written by Eric Samuelsen in 2017 and based on a true story. It opens on March 13 at 7:30 p.m. and runs Fridays through Sundays until March 29.

Director Alex Ungerman knew the playwright Samuelsen, as they are both from Salt Lake City.

According to Ungerman and an article Samuelsen wrote before his passing in 2019, the playwright’s grandparents lived in Norway during the time of the occupation. Samuelsen’s great uncle even fought with the resistance, known as The Ice Front, which was a set of guidelines from the government-in-exile detailing how Norwegians were to resist under the occupation.

Through stories from his family and through discussing with a friend at the National Archive who knew of Samuelsen’s interest in Norwegian national history, Samuelsen learned more about the occupation and about the Norwegian National Theatre troupe’s rebellion against the show.

The troupe even went so far as to try and burn the theatre down, making it look like an accident, so they wouldn’t have to perform the show, which was entitled “The Last Scream.” They performed it badly on purpose during opening night and a German soldier shot one of the troupe members.

While the story is based on fact, Samuelsen invented the individual characters, including those who were targeted by the Nazis. Troupe members in the show include a hidden Jew and a hidden homosexual, and a character linked to the Roma.

In a 2017 interview, Samuelsen said “The actor characters of the National ultimately had to choose. They could protect themselves, stay safe (relatively), and acquiesce to Nazi demands. Or they could choose rebellion and civil disobedience. Their lives were at stake. The choice was never easy. But it was necessary.”

For more information about “The Ice Front” and to purchase tickets, click here.