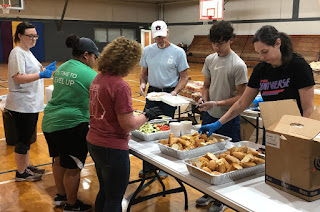 With most facilities and programs at the Levite Jewish Community Center in Birmingham closed due to COVID-19 restrictions, the usually-bustling hallways are mostly quiet.

But while JCCs in Nashville and New Orleans have had to completely shut down, the LJCC remains open, mainly as a Red Cross certified Disaster Relief/Preparedness Facility, offering services to the general community.

Operation Cares: Camp for Essential Worker Families is providing camp-style childcare in small groups to families where the parents are essential workers, such as health care workers or first responders. The definition was expanded to include those working for financial institutions or grocery stores.

Due to the need to keep groups small, the camp is limited to 50 children. Those who are able are asked to pay $30 per day, but accommodations are being made due to financial constraints families are facing.

Operation Cares Kitchen is taking donated food items and assembling lunches that are being distributed in the parking lot to those in need on weekdays from 11 a.m. to 1 p.m., with no questions asked. The program is aimed toward families that rely on the school lunch program. The lunches began on March 18 and initially were to run through March 20, but the LJCC hopes to provide the service for as long as it is needed, and on March 21 announced they would extend through at least March 27.

On March 20, the LJCC staff and volunteers are delivering food and care packages at a senior living complex. The LJCC is also collecting personal protective equipment, such as face masks or N95s, for hospitals that are running low.

On March 23, the LJCC will host a Red Cross blood drive from 11 a.m. to 5 p.m., in response to the sharp drop in blood donations. The time slots filled withing two hours of the announcement, but walk-ins are welcome.

LJCC Executive Director Samantha Dubrinsky said when the LJCC realized the effect COVID-19 would have on the community, “The first question we asked was, ‘How can we help?’ Our mission, at its core, is to make our community better. Our vision is for a better Birmingham community — one that the LJCC helps build and shape through universal values expressed Jewishly.”