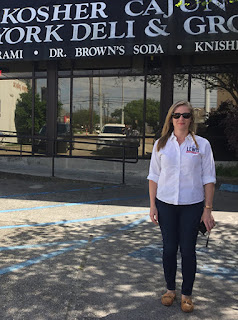 For three months, New Orleans First City Court Judge candidate Sara Lewis was in campaign mode. “Then, zero,” she said, as she — like everyone else — was abiding by the shelter-in-place order that postponed the upcoming election to June 20 — and just before press time, again to July 11.

On the day of this interview, she was heading off to Kosher Cajun (pictured here) to pick up Passover packages to distribute to those who were unable to leave their homes, on behalf of Jewish Family Service. She was also planning to make challah, saying that “in general I wouldn’t have the time for a four-hour recipe.”

But even with the shutdown, there is still an election coming up. With the campaign on isolation mode, “we have been trying to do volunteer outreach — phone banks, call centers” to let voters know about the date change for the election. She also is volunteering regularly at food banks and meal delivery non-profits.

Lewis came to New Orleans in 2006 to attend law school at Tulane, where her sister had attended as an undergraduate. They grew up in Buffalo, and Lewis received her undergraduate degree from Georgetown.

When she graduated from law school in 2009, she decided to stay in New Orleans, utilizing the Federation’s Jewish newcomers incentive package. “New Orleans can get its hooks into you,” she explained.

Her sister was already setting down roots in the area, and now, aside from a couple of cousins, the whole U.S. family is in the New Orleans area, after their mother, a native of Italy, moved to Bay St. Louis a couple of years ago. Her father had moved to Israel, where several other family members are, when she was in high school, and died several years ago.

The family wound up in Buffalo when her paternal grandparents moved there after the Holocaust. Her grandfather, Leo Lewis, had been sent to the Achmunt work camp in 1940 at age 16, and when it was asked if there were any mechanics, he answered yes, even though the only thing in the ballpark was his training as a dental technician. “The mechanic” spent the war going from one forced labor camp to another, finding out after the war that he was the only member of his family to survive.

He married a fellow survivor, Zelda, then in Buffalo, he became a well-known businessman. He died in 2012.

Lewis attends Touro Synagogue, and is on the board of JNOLA, heading the Jewish Life and Social Action committee.

Lewis has been in private practice with Wall, Bullington and Cook, LLC, where she is now a partner.

Having practiced “in over 20 parishes, different courthouses,” she said “the difference of having a judge who is prepared and knows what is going on, researches the issues and makes a legally based decision… is the difference between having access to justice, or not.”

The First City Court handles personal injury cases that are less than $25,000, small claims below $5,000 and evictions under $3,000. For a lot of people, that court is the only access they have to the court system, she said. Many are not well-represented, and because they live “paycheck to paycheck,” being able to put food on the table or keep a roof over their heads is a big deal.

She wants to bring a pro bono volunteer mediation process to New Orleans, working with the Access to Justice Commission on a program similar to one in the Baton Rouge Family Court and Baton Rouge City Court.

“As Judge, I would identify cases that would benefit from this program, and assist in implementing this pilot mediation program in Orleans Parish,” she said. Often, the process provides “an avenue for people to resolve a dispute in ways a court just can’t.” A judge “can do A or B,” but a mediation can scrap that as the only options and come up with a different resolution.

She noted studies that say 90 percent of those who go through mediation “feel it is better than going through a trial.”

With volunteer attorneys and law students, “the court could provide — at no cost to the parties — an independent third party who is well versed in the law to aid them in finding a mutually agreed upon solution to their conflict.”

She also wants to tackle the “crippling burden” of an eviction rate double the national average. In communities of color, “1 in 4 people will deal with an eviction in three years, compared to 1 in 24 for predominantly white areas,” she said. “I will thoroughly review cases and offer people all the information they need, along with a clear, easily accessible, and streamlined process.”

As judge, she wants to “implement programs people can use” and “give people the opportunity to resolve their life’s biggest problems.”