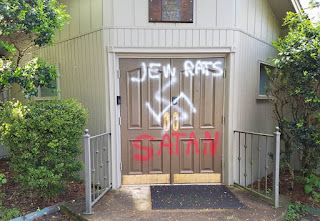 According to Laura King, past president of the Jewish Federation of Huntsville and North Alabama, at Chabad the vandal spray painted similar messages to the ones at Etz Chayim. She said Chabad’s second-night Seder went until just after midnight, and the vandalism occurred around 1 a.m., with spray-painted messages on the driveway and garage.

While there seemed to be more than one vandal at Etz Chayim, one of whom shone a flashlight into a security camera to prevent identification, the Chabad attack seems to have been the work of an individual, and camera footage is being reviewed, and neighbors are being asked to forward any surveillance video they may have.

As is often the case in smaller communities, the Chabad house is also the family’s residence.

As the morning began, many in the local Christian community were spending their Good Friday standing in solidarity with the Jewish community, removing the graffiti and repainting the garage.

The Federal Bureau of Investigation is now involved as the attacks are being classified as hate crimes.

Click here for how the city’s administration and police are handling the case.

As Jews around the world were at home celebrating the start of Passover, Etz Chayim, the Conservative congregation in Huntsville, was vandalized with several swastikas, racial slurs and “Holohoax.” The graffiti was on the building and driveway, and the sign facing Bailey Cove Road was tagged with a swastika and “Satan.”

Among the other phrases were “F— Kikes,” “Gas Em All,” “White Power,” “Jew Scum” and the lightning-bolt “SS.” The attack happened during the night going from April 8 to 9.

B’nai Sholom has already asked Huntsville Police “to station an officer and police car at the Temple this evening, and to step up patrols of Temple B’nai Sholom today, tonight and over the next few days.”

The statement continued, “We offer our love and our support to the families of Etz Chayim. We may be different congregations, but we are all part of the greater Jewish Community of Huntsville, Alabama. We stand together united against all forms of antisemitism and hate speech. We are still one people.”

B’nai Sholom is the community’s Reform congregation. Huntsville also has a Chabad, which because of the first two days of Passover observance and Shabbat will not be able to respond until Saturday evening. As Conservative congregations also follow those restrictions on work, there also may not be any official reaction by Etz Chayim until after Shabbat.

Etz Chayim is a congregation of about 60 families, and as with every other congregation, has suspended in-person services due to the coronavirus restrictions. Rabbi Stephen Listfield of Atlanta serves as visiting rabbi monthly.

The Jewish Federation of Huntsville and North Alabama noted that while Passover is usually a time of community and family gatherings, the coronavirus lockdowns dramatically altered those celebrations this year. “To think anyone would take advantage of such a time to commit such heinous acts is the lowest of the low. The vicious and repugnant images found on the walls of Etz Chayim are a powerful reminder that anti-Semitism is still here and we, as a community, must come together and work tirelessly to end it.”

Security footage is being reviewed, but rain at the time reportedly has made it more of a challenge.

Pastors Patrick and Andrea Penn said they were driving by Etz Chayim around 8:15 a.m. when they saw the police cars in the parking lot. Their church, The Dwelling Place, which has hosted Israel solidarity events with the Jewish community, issued a statement saying they “condemn this horrendous act of hatred in our community. We are offering up prayers on your behalf. We love you and are standing with you.”

Patrick Penn said “It is simply unimaginable that such a manifestation of evil would be perpetrated any time, anywhere, but the fact that it occurred during the week of Passover in my hometown, just a couple of miles from my home, where my Jewish friends worship is particularly disturbing.”

He said many of his Christian colleagues have been in touch with him to see how they could do a “tangible expression of love and support.”

Interfaith Mission Service in Huntsville said the group “joins with our Jewish brothers and sisters and our interfaith communities offering our love and our support to the families of Etz Chayim. We stand together united against all forms of antisemitism and hate speech. We are still one people.”

IMS set up a Love and Support fund for Etz Chayim online.

Donations made directly to the congregation through the Etz Chayim website will go toward security enhancements.

Dan Weinrib, president of Birmingham’s Temple Beth-El, the state’s largest Conservative congregation, issued a statement on behalf of Beth-El, saying “We Conservative Jews proudly stand shoulder-to-shoulder with our friends at Etz Chayim, and we are grateful for the immediate outpouring of love from their Christian neighbors. Whoever committed these hateful anti-semitic acts at the start of Passover knew exactly what they were doing. We look forward to the day these criminals get apprehended and held accountable for their disgusting actions.”

Huntsville Mayor Tommy Battle said the city “condemns anti-Semitism in the strongest possible terms… We seek to find those who perpetrated this crime, and I urge anyone with information about the vandalism to report it to police. As a City, and as an inclusive community, we stand side by side with our Jewish brothers and sisters and people of all faiths.”

Pastor Timothy Cox, president of the Alabama Baptist State Convention, said “My heart is saddened by the vandalism with Nazi graffiti of a Jewish synagogue in Huntsville. This is a condemnable attack on a place of worship and on religious liberty. Such attacks must not be tolerated. Praying for those who are hurt by such hate and praying for authorities to make a swift apprehension of the perpetrators.”

John Buhler, co-leader of the Alabama-Israel Task Force, said the graffiti was “deeply troubling,” especially on Passover and in the month when the Holocaust is commemorated. “To our dear Jewish friends — You are not alone. We love you. We stand with you. May we soon see this plague of such hatred also eradicated. And may we see it together, with our own eyes, in this generation.”

Tim Tatum of Aldersgate United Methodist Church was teaching a class on connections between Passover and Easter when they found out about the vandalism. “The words and actions of the vandals represent the worst of human hatred and prejudice,” the church posted on Facebook. “Please join together in praying for our brothers and sisters at Etz Chayim. Pray that the hearts of the vandals will changed.”

The Alabama Democratic Party tweeted “We stand with you, and the vandals who defaced your synagogue deserve prompt punishment. When the worst elements of our society speak of hate, we should stand up and speak against it. Alabama is a place for all y’all.”

After the Chabad vandalism, the Democratic Party tweeted, “The families of the Chabad of Huntsville should be able to worship without fear. We hope that the perpetrators are caught and that justice is done.”

U.S. Rep. Mo Brooks recalled speaking at Etz Chayim before and urged anyone with information about it to share it with the police. “We cannot tolerate sordid, hateful conduct. We are better than that!”

Terry Lathan, chair of the Alabama Republican Party, said the vandalism was “absolutely despicable behavior fueled by hate,” but “it is good to see so many in the area supporting the synagogue. May their examples be what is remembered.”

Epworth United Methodist Church posted “Please join us in praying for Etz Chayim Synagogue and the Jewish community in Huntsville and beyond in response to this ugly act of vandalism during Passover.”

United Church of Huntsville stated that its members mourn with the members of Etz Chayim. “As Christians, we decry any attacks on houses of the Lord and we pray for peace and safety for our Jewish neighbors.”

Allison Padilla-Goodman, vice president of the Southern division of the Anti-Defamation League, based in Atlanta, said “we are horrified” by the graffiti, “especially during Passover when people focus on liberation and unity. We must always stand up to antisemitism and hatred.”

Scott Dawson of the Scott Dawson Evangelistic Ministries in Birmingham said “I wholeheartedly condemn the vandalism and anti-Semitic messages” that are “a stark reminder that as we battle a virus that kills the body, sin is an illness that kills the heart.”

Often, communities rally when an incident like this occurs. Following the September 2018 vandalism at Northshore Jewish Congregation in Mandeville, La., a rally drew a large crowd from the Christian community and filled the building. Due to coronavirus social distancing restrictions, such an event is not possible now.

Laura King, past president of the Jewish Federation of Huntsville and North Alabama, said “I am sure” once restrictions are lifted “we will do something.”

She also noted that there have been numerous offers of assistance from the Christian community, and by late morning a group of volunteers was removing the graffiti. Before long, it had all been removed, and tomorrow the grass will be mowed and other exterior touch-ups made.

“The ugly was more than compensated for by our beautiful community, which I am so proud of,” King said.