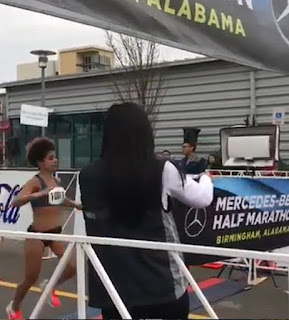 Maor Tiyouri, who ran for Israel in the 2016 Summer Olympics marathon, won the women’s division of the Mercedes Half-Marathon in Birmingham on Feb. 16, as part of her road back to the possibility of competing in the 2020 Olympics.

That road has been delayed, with the recent decision to push the 2020 Games in Tokyo to “no later than” July 2021, due to the global coronavirus fight.

She returned to Birmingham on March 7 for the Birmingham Wine 10-kilometer race, placing second out of 764 women. She finished in 33 minutes, 34.6 seconds, a new personal best.

She was born in Kfar Saba, and in fourth grade was asked if she wanted to take part in municipal competitions. She ran and placed eighth. The next two years, she won, and when she was in eighth grade she was recommended for an after-school athletics program. She also did martial arts and tennis, “I was all over the place in terms of athletics.”

Her parents told her to focus on one sport, so she decided to continue running. “I saw I was winning the races in the region, then national,” and figured that she was good at it. “Running kind of chose me.”

Being in the Maccabiah Games was “a cool experience in that it was an international race in Israel,” and she is still in touch with many people she met. She remembers Aly Goldfarb of Birmingham, who moved to Israel in 2011 to become part of the Israel national track team.

She ran for the San Francisco Dons while in college at the University of San Francisco, graduating in 2014. She competed twice in the NCAA Cross Country championships, and was first team All West Coast Conference for three years.

In Israel, she is a three-time national champion, and holds the Israeli record in the 5000-meter.

Being in the Olympics “was an amazing experience. I was very honored and proud to put on my Israel jersey and run with it around Rio.” Being there was “probably the biggest accomplishment of my life.”

After competing in the 2017 World Championships, Tiyouri had four injuries in a row — “all small injuries that took me out for a long time,” she said.

Her Birmingham visits were part of her long road back. “I wanted to see what I’m capable of doing right now,” she said.

February is generally a slow time in running, due to the weather. This year, there are also Olympic qualifying events drawing the major names in running, and after the Mercedes event, noted the U.S. Olympic trials were two weeks away in Atlanta.

“Alabama should be warm enough to run a race in February,” she said. “It’s snowing in Boulder,” where she lives and trains.

She had planned to run in Rotterdam in April, a qualifying race for the Olympics.

After the Birmingham Wine 10k, which she had also run in 2018, she said “it is an interesting process reacquiring racing skills.”

She noted that when she did the 10k in 2018, “everyone was super-welcoming,” and local race organizers have kept her updated on opportunities.

She is taking a “we’ll see” approach on making the Olympics in Tokyo. Before the world shut down, she said she did not have a lot of time to prepare to qualify. “You never know, so you have to take your opportunities when they come.”