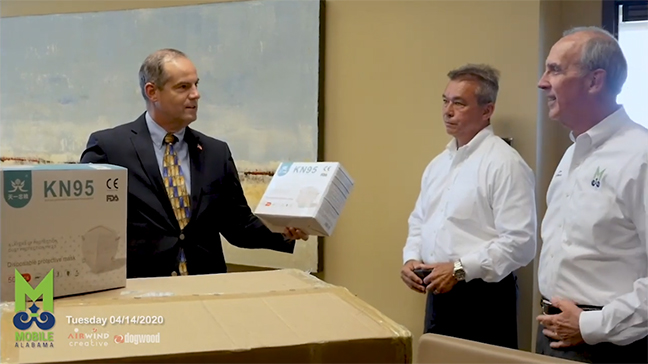 A gift to the city of Mobile that was initially attributed to Yair Netanyahu, son of Israeli prime minister Benjamin Netanyahu, is being put to good use, though it drew some controversy in Israel initially, due to a misunderstanding on where the masks actually came from.

On April 14, the city of Mobile uploaded a video of Jim Jewell, Special Agent in Charge of the Mobile division of the Federal Bureau of Investigation, presenting 1,000 N95 masks to Mayor Sandy Stimpson.

Jewell said the masks came from Yisroel Stefansky of ASTI Advanced and Yair Netanyahu, who had visited Mobile last summer. “They wanted to offer the city of Mobile a token of thanks,” Jewell said. “We at the FBI of Mobile just happened to be the recipient of the shipment, he sent it to me directly to provide to the city’s first responders.”

A nonprofit established in 2003, Advanced Security Training Institute works to educate American emergency agencies on the latest techniques to ensure safety and security from terrorism and other threats.

Stimpson said Stefansky “was working with our first responders, with the FBI, trying to understand what we were doing and also encouraging us to come over and learn some of the strategies and tactics that they have” in Israel. “Not in our wildest dreams did we think they would remember us during this crisis and send us these masks to be distributed to our first responders.”

The initial social media posts from Mobile, which have since been edited or deleted, indicated the masks were given by Netanyahu, which led to criticism in Israel, where — as is the case all over the world — masks and other protective equipment are in short supply. Critics accused Netanyahu of putting Alabama ahead of Israel, even claiming he had taken the 1,000 masks from Israeli supplies to send them overseas.

A spokesperson for the Netanyahu family said he had “nothing to do with the delivery of the protective masks,” and “he learned about them from the media.”

The masks had been sent by a “private American organization that Yair worked for” and the group “sent the masks in the name of Yair, without his knowledge, as part of a pro-Israeli PR campaign.”

On April 19, ASTI tweeted that last summer, Stefansky and Netanyahu “met with U.S. leaders, interested in discussing ASTI’s mission to ensure the safety of Americans, especially the most vulnerable, our children.” The tweet then said ASTI was “solely responsible” the N95 masks, and “Yair Netanyahu was not involved in any way with this transaction.”

Netanyahu thanked ASTI for issuing the clarification, and thanked Stimpson “for your true friendship and support towards Israel and the Jewish people! I look forward seeing you again in Mobile, Alabama, or in our eternal capital — Jerusalem.”

Stimpson responded, “Thank you my friend. Look forward to seeing you again soon. We treasure our relationship with Israel.”

On April 19, Stimpson issued a release clarifying the situation. “We are grateful to the Advanced Security Training Institute for making this donation. In expressing our appreciation, we credited Yair Netanyahu for being part of the donation. This was incorrect and we regret the error.”

He added, “ASTI has an important mission to help American communities become safer by sharing expertise learned in Israel, and we are grateful for their interest in supporting our first responders,” he added. “On behalf of the City of Mobile, we wish to thank Yisroel and ASTI for donating the masks which are sorely needed in the fight against COVID-19. We are blessed by our friends in Israel and the Jewish community. Our prayers are with them all people at such a time of crisis around the world.”

Carrie Simms, chief operating officer for ASTI, said they have built “incredible relationships” with many communities in the U.S. Because “we must support our First Responders with the medical supplies required to keep them safe, as they focus on keeping us safe,” ASTI reached out to communities to see what their needs were, and Mobile indicated they could use more masks.

She said Netanyahu traveled with Stefansky last summer “as a private citizen” because he wanted “to learn more about the great relationship between American and Israeli First Responders.”

On April 15, 250 of the donated masks were presented to Charles White, chief executive officer of Franklin Primary Health Center, which has been doing a drive-through testing site and needed masks to keep the workers safe while administering the tests. “We are just so thankful, because one of the thing we have been running short of is PPE,” White said. “My people can not provide care without them.”

As an example of the mask scarcity, Mobile Fire Chief Mark Sealy and his family had spent Easter Weekend repairing over 200 damaged N95 masks that had defective dry-rotted straps.

As of April 17, Mobile had 627 confirmed cases of COVID-19 and 25 deaths attributed to the virus.